SEOUL, Aug. 18 (Yonhap) -- Prosecutors on Thursday turned down a request by former Justice Minister Cho Kuk's wife to suspend the four-year prison sentence she got on charges of college admission fraud involving her daughter and financial misconduct, officials said.

Chung Kyung-sim, a former professor of Dongyang University, has been serving time after receiving the prison sentence from the Supreme Court in January on charges including forging a presidential citation from her university and getting a false internship certificate to use for her daughter's admission to a medical school in 2013.

The charges against her also included financial misconduct in violation of the Financial Investment Services And Capital Markets Act.

Chung filed a request to suspend her prison sentence early this month, saying she needs urgent medical operations for injuries she got from multiple falls inside the prison, including a ruptured disc.

The Seoul Central District Prosecutors Office held a meeting earlier in the day to review the request. 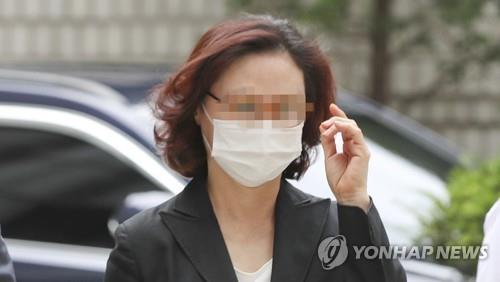