CHANGWON, South Korea, Aug. 18 (Yonhap) -- A protester was arrested Thursday on charges of making threats with a knife in front of former President Moon Jae-in's home.

The conservative activist, who had been staging a one-man protest in front of Moon's home in Yangsan, 309 kilometers southeast of Seoul, since Moon left office on May 10, threatened an aide to Moon and others with a box cutter Tuesday, police said. 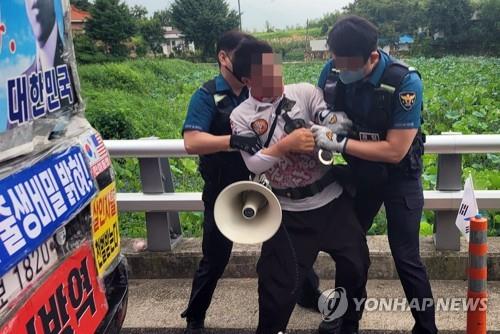 The man also allegedly made a verbal threat to Moon and his wife Monday when the couple came out of their house for a stroll around the neighborhood.

The Ulsan District Court issued an arrest warrant for the suspect, citing the risk of him destroying evidence and fleeing.

Since his retirement, Moon and his neighborhood have been plagued by noisy protests, and the former president in late May filed a complaint against four activists, including the arrested man, for making insults and threats.
(END)