"We believe that there are practical steps that can be taken that help advance that shared goal of the complete denuclearization of the Korean Peninsula," he said when asked if the U.S. agrees with providing incentives to the North in the early stages of its denuclearization. 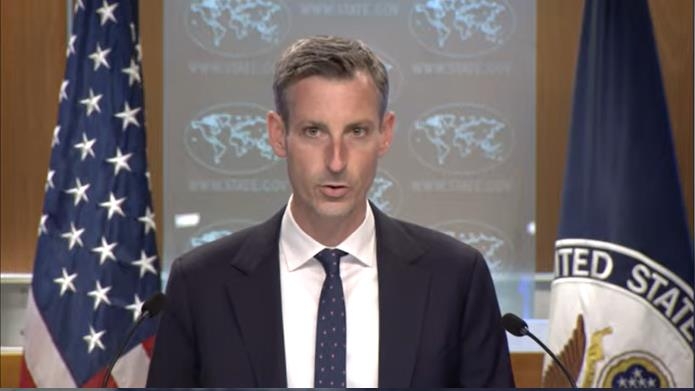 South Korean President Yoon Suk-yeol on Wednesday said his country will carry out "aid projects" for the North as long as the country shows its commitment to denuclearization.

"We don't believe that the complete denuclearization of the Korean Peninsula will take place in one fell swoop," said Price. "We think that it will be an incremental process where both sides will be in the position to take incremental steps that help move us along towards that collective goal."

The department spokesperson also urged Pyongyang to engage in diplomacy, saying its return to dialogue will be a "welcomed first step."

Price earlier said the U.S. will continue to maintain sanctions on the North until or unless the country changes its fundamental approach.

The spokesperson, however, noted Pyongyang currently poses the most serious security threat in the Indo-Pacific region.

"There is perhaps no greater challenge to peace and security in that region than that posed by the DPRK," Price said when asked about North Korea's possible participation in a multinational military exercise led by Russia and China.

"And in the face of the DPRK's provocations, including its multiple ballistic missile launches, including its ICBM tests and launches in recent months, we have taken action with our treaty allies -- Japan and the ROK -- to ensure readiness, to ensure appropriate deterrence against the threat that we collectively face from the DPRK," he added, referring to South Korea by its official name, the Republic of Korea.

North Korea has launched more than 30 ballistic missiles in 18 rounds of missile tests this year, the largest number of ballistic missiles it fired in a single year. Pyongyang also fired two cruise missiles this week, marking its 19th show of force in the year.

Price underlined the importance of cooperation between South Korea and Japan in dealing with the threat posed by North Korea, calling it a challenge that no single country, including the U.S., can "effectively confront alone."