The archives' records from the Moon presidency related to the two cases, both of which occurred in 2019, were searched by prosecutors from Seoul and the central city of Daejeon, respectively, throughout the day, according to judicial officials.

The Seoul Central District Prosecutors Office sent about 10 prosecutors and investigators to the archives in the central administrative city of Sejong in the afternoon to look for clues in the allegedly forced repatriation of the two North Korean fishermen, according to the judicial officials. 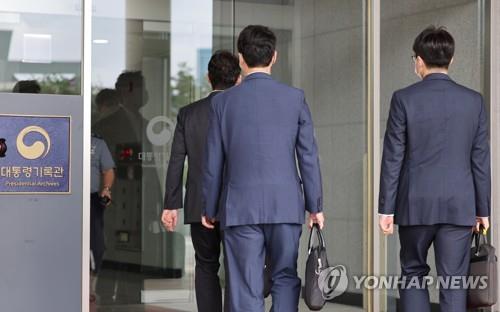 Prosecutors have been investigating the allegations that the Moon administration deported the two North Koreans back to the North in November 2019 against their will to defect to the South after accusing them of killing 16 fellow crew members.

Prosecutors are expected to selectively look into the records of the Moon administration's decision-making process related to the repatriation case, the officials said.

Earlier on July 6, the National Intelligence Service (NIS) filed a complaint with the prosecution against former NIS chief Suh Hoon, alleging that he ordered an early end to an internal investigation into the fishermen who were sent back to the North on Nov. 7, 2019, after being captured near the eastern inter-Korean sea border a week earlier.

Chung Eui-yong and Kim Yeon-chul, who formerly served as the director of the National Security Office and the unification minister, respectively, during the Moon administration, have also been under investigation on abuse of power and other charges after being sued by civic groups.

Just before the repatriation, the justice ministry reviewed its legality and found no legal grounds to send the North Koreans back to the North, the ministry said recently.

Judicial officials speculate that Suh, Chung, Kim and other Moon government officials suspected of being involved in the repatriation may soon be summoned to the prosecution to face questioning.

Earlier on Friday, the Presidential Archives was raided by prosecutors from the Daejeon District Prosecutors Office, investigating possible illegalities in the Moon government's controversial decision in 2019 to close an aging nuclear reactor ahead of its legal expiration date.

In March this year, another civic group filed a complaint against Moon, alleging his possible abuse of power over the reactor closure decision.

The Wolsong 1 reactor built in 1983 in the southeastern city of Gyeongju, which became the nation's oldest nuclear reactor after the permanent closure of the Gori 1 reactor in 2017, was scheduled to continue its operations until 2022.

But the state-run Korea Hydro & Nuclear Power Co. decided in December 2019 to close the Wolsong 1 reactor, citing the Moon government's viability assessment. The following year, however, the Board of Audit and Inspection said that the reactor's economic viability was unreasonably undervalued.

The prosecution has raided the Presidential Archives nine times so far, including the two times Friday.

All records of the Moon presidency were transferred to the archives on May 9 in time for his retirement.

In principle, access to the archives' presidential records is restricted for a maximum of 15 years but can be permitted with an approval by more than two-thirds of the National Assembly or by an appellate court.

Friday's raids were reportedly approved by the Seoul High Court and the Daejeon High Court, respectively.