SEOUL, Aug. 20 (Yonhap) -- A group of lawmakers from South Korea's rival parties departed for Washington, D.C., Saturday for a weeklong visit at the invitation of the U.S. State Department.

National Assembly Vice Speaker Chung Jin-suk, Reps. Kim Seok-ki and Kim Jung-jae from the ruling People Power Party and Reps. Kim Han-jung and Lee Jae-jung from the main opposition Democratic Party will meet with officials from the U.S. government and think tanks to discuss various pending issues, according to the lawmakers.

A number of Japanese lawmakers are also expected to attend the State Department invitation program.

"Lawmakers from South Korea, the U.S. and Japan are meeting in Washington to participate in a program aimed at exchanging opinions about issues of common interest," Chung told Yonhap News Agency over the phone ahead of his departure.

The program will begin with a session at the Center for Strategic and International Studies with Victor Cha, Korea chair and senior vice president of the think tank.

The delegation will return home on Aug. 28. 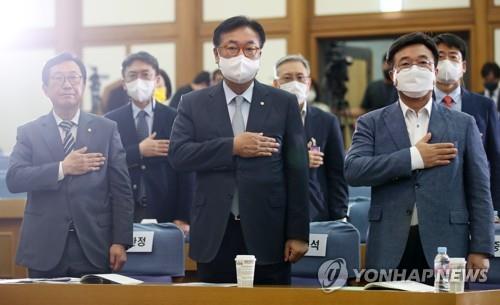