Ordinary people expected consumer prices will grow 4.3 percent over the next year, which was down from an all-time high of 4.7 percent a month ago, according to the poll conducted by the Bank of Korea (BOK). This marked the first monthly decline since December 2021.

"Consumer sentiment seems to have been influenced by the government's forecast that the inflation is likely to peak in the second half of this year amid expectations that the global inflation growth has neared its peak," said Hwang Hee-jin, a senior official at the BOK's statistics research team. 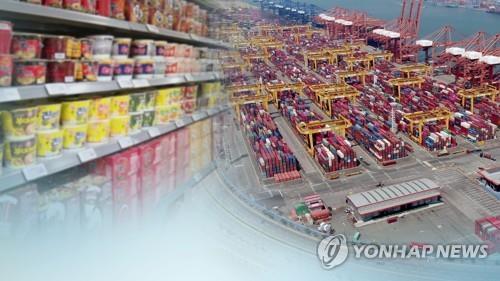 Data on expected inflation is closely monitored, as a rise could prompt people to demand wage hikes due to expectations that their real purchasing power will decline. Those wage hikes can eventually put more upward pressure on already-high inflation.

South Korea has been grappling with rising inflation driven by high oil and commodity prices amid rebounding demand from the pandemic and the ongoing war in Ukraine that has aggravated global supply chain disruptions.

The country's consumer prices, a major gauge of inflation, jumped 6.3 percent last month from a year earlier, accelerating from a 6 percent on-year spike in June. This marked the sharpest on-year increase since November 1998, when consumer inflation jumped 6.8 percent.

In July, the BOK raised its key interest rate by 0.5 percentage point to 2.25 percent, the steepest and sixth increase in borrowing costs since August last year, to tame the high-flying inflation rates.

Market observers expect the central bank will likely deliver another quarter percentage-point hike in a meeting to be held Thursday.

Meanwhile, the composite consumer sentiment index (CCSI) for August stood at 88.8, up 2.8 points from the previous month, the data showed.

The rebound in the CCSI came after the July index dipped to the lowest since September 2020 as aggressive monetary tightening and soaring energy costs around the world stoked concerns about a slowdown in the global economy.