WASHINGTON, Aug. 22 (Yonhap) -- South Korea's offer to help North Korea in exchange for denuclearization is entirely consistent with the United States' own plan to rid the North of its nuclear ambition, a state department spokesperson said Monday.

"We have been clear about our support for the bold or the ambitious plan that the South Korean administration has put forward," the department press secretary said in a daily press briefing. 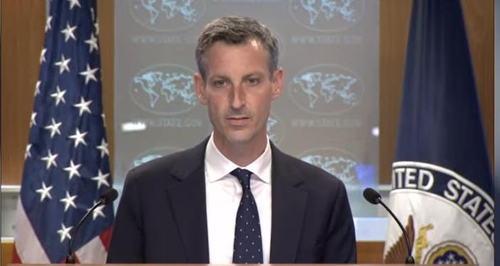 "It's a plan that's entirely consistent with our approach to the DPRK's nuclear weapons program, to its ballistic missile program in that it sees the potential for practical, incremental advancements towards the complete denuclearization of the Korean Peninsula," added Price.

South Korean President Yoon Suk-yeol offered last week to launch aid programs for the impoverished North as long as the country showed its commitment to denuclearize.

Kim Yo-jong dismissed the offer as absurd, adding the North would never sit face-to-face with the Yoon administration to discuss its denuclearization.

Price said the U.S. and its allies will continue to reach out to Pyongyang for dialogue.

"We are going to continue to be clear about what we are prepared to do and what we seek collectively to achieve with our South Korean allies, with our Japanese allies, and we will continue to convey those messages both publicly and directly to the DPRK," he added.

The department spokesperson also urged Pyongyang to return to dialogue.

"We have conveyed publicly, we have also conveyed repeatedly, privately to the DPRK that we are ready and willing to engage in that dialogue and diplomacy. The DPRK has more recently heard that same message from the new administration in South Korea," said Price.

"We believe it is incumbent on the DPRK to respond and to respond affirmatively to that, knowing that, believing that we can achieve progress towards what is a collective goal," he added.

The country is widely believed to be preparing to conduct what will be its seventh nuclear test.