SEOUL, Aug. 23 (Yonhap) -- South Korea's exports to China have increased more than 160 times since they set up diplomatic ties 30 years ago, much higher than the growth rate of Seoul's overall overseas shipments, data showed Tuesday.

South Korea's exports to China came to US$162.9 billion last year, 162.4 times the value of slightly over $1 billion in 1991, one year before their establishment of diplomatic ties, according to the data from the Korea International Trade Association (KITA).

Over the same period, Seoul's total exports increased ninefold to $644.4 billion from $71.9 billion.

South Korea's shipments to the United States rose 5.2 times to $95.9 billion during the cited period, with those to Japan expanding 2.4 times to $30.1 billion. 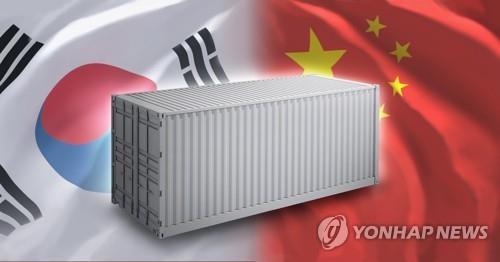 Beijing outpaced America and clinched the No. 1 spot in 2003, retaining the leading status for the past 20 years.

South Korea's trade balance with China has remained in the black since posting a surplus of $1.07 billion in 1992.

In the first seven months of this year, South Korea's trade surplus came to $3.57 billion. But it posted a trade deficit for three months running in July and is expected to record red ink in August as well.

The continued deficit stems mainly from the fallout of China's lockdowns of Shanghai and other big cities to stem the spread of COVID-19, with a slowdown in the world's No. 2 economy also playing a part, according to KITA.

Last year, South Korea was China's No. 4 export destination, with the latter's shipments reaching $150.5 billion, or 4.5 percent of its total exports.
(END)