(ATTN: UPDATES with more details and background in last 5 paras)

SUWON, South Korea, Aug. 23 (Yonhap) -- The wife of former ruling party presidential candidate Lee Jae-myung appeared before police on Tuesday to face questioning about allegations related to her personal use of a provincial government corporate credit card years ago.

Kim Hye-kyung arrived at the Gyeonggi Nambu Provincial Police Agency in Suwon, 50 kilometers south of Seoul, around 1:45 p.m., accompanied by her lawyer.

She was asked by reporters about suspicions related to her corporate credit card use but did not reply.

Kim is accused of using a credit card of the Gyeonggi government for personal shopping and eating, while her husband was Gyeonggi governor from 2018-2021. 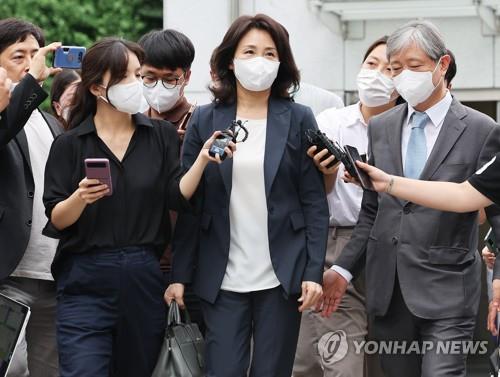 She is also suspected of forcing civil servants to run her personal errands, such as getting drug prescriptions and buying prescription drugs on her behalf.

Allegations of Kim's corporate credit card misuse and other misconduct surfaced early this year ahead of the March 9 presidential election.

She issued an apology in February, saying she took full responsibility for what transpired as she failed to draw a line between personal and official business.

Lee was elected to the National Assembly in a June by-election and is now running for the DP chairmanship.

Kim's appearance at the Gyeonggi police agency came about two weeks after a summons was sent to her on Aug. 9.

Ahead of her appearance, Kim said through Lee's Facebook account that it is regrettable for the police to summon and investigate her, even though there is solid evidence that she was unaware of the alleged corporate credit card misuse.

Kim is expected to undergo extended questioning as a suspect but her additional summons is unlikely to occur, as the statute of limitations for her case, set for Sept. 9, is not far away, according to legal experts.

In January, a whistleblower, who formerly worked in the Gyeonggi provincial government, alleged that Kim had forced provincial officials to run personal errands, such as picking up prescription medicine under another person's name and delivering food and other goods to her home.

The whistleblower also claimed that he was instructed by a Grade 5 provincial official surnamed Bae to use the Gyeonggi government credit card to pay for Kim's meals on multiple occasions. He based his claim on text messages and phone calls exchanged between him and Bae.

The PPP has filed a separate complaint against Lee, Kim and Bae on suspicion of abuse of power, saying Kim appears to have used Bae as her personal secretary for three years from 2018, causing losses to the provincial treasury.

Police have so far raided the Gyeonggi provincial government office and 129 restaurants and other places, where the corporate card was used, and questioned Bae and the whistleblower.