Prosecutors have been investigating the chairman of Deutsch Motors Inc., a BMW car dealer in South Korea, over allegations of mobilizing influential market players, including the first lady, in order to boost Deutsch Motors' stock prices starting in December 2009 for about three years.

The first lady has also faced suspicions that she submitted false records of her academic and career background on multiple resumes, including one for a teaching job at Kookmin University, which she ultimately secured in 2014.

Rep. Kim Yong-min, 11 other DP lawmakers and one independent lawmaker tabled the independent counsel bill Monday, claiming the prosecution is going easy on her because she's the first lady.

On Tuesday, the DP's deputy floor leader Jin Sung-joon hinted at the possibility of the party pushing for the special probe in unison, though some lawmakers called for a more cautious approach on the matter.

Jin told MBC radio there are concerns within the party that the prosecution and the police will not properly handle the investigation, while Rep. Jeon Hae-cheol told YTN radio that a special prosecutor probe should be conducted after investigative authorities are given enough time to look into the case.

The DP's spokesperson Lee Soo-jin told reporters the party has yet to decide to make the special counsel probe a party-line issue.

"The DP's goal is to drive the parliament into a dog fight. ... It is trying to muddy the waters as its former presidential candidate Lee Jae-myung and his wife face investigations," PPP floor leader Kweon Seong-dong said, referring to corruption allegations against Lee and his wife.

Lee's wife appeared before police Tuesday to face questioning about allegations related to her personal use of a provincial government corporate credit card years ago. 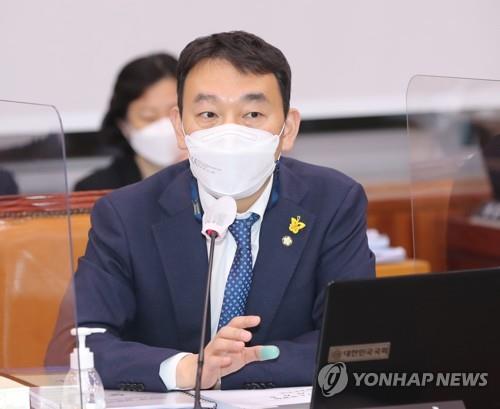