SEOUL, Aug. 23 (Yonhap) -- Unionized truck drivers working for Hite Jinro Co. said Tuesday they will partially dismiss their sit-in strike at the headquarters of the country's leading brewer and distiller.

The unionists have been staging the walkout on the rooftop and lobby of the company's head office in Seoul for eight days over wage hikes and other disputes.

The strikers will end their occupation of the first-floor lobby in order to spur conversation between the labor and the management at 10 a.m. Wednesday, while keeping the protest on the rooftop as status-quo, the union said in an e-mail briefing.

"We have repeatedly made our point clear -- Once the management keeps their word about withdrawing the damages suit and rehiring the dismissed truckers, we are open for discussions about other agendas," it added.

The strikers requested the chief executive of Hite Jinro make direct representation of the management part of the negotiation, whereas Hite Jinro said the chief of Suyang Logistics will play such a role. Hite Jinro's logistics team head will audit the negotiation process as an observer, according to the firm. 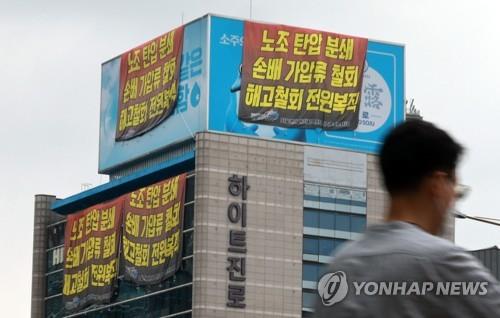 The labor dispute dates back to March when 132 truck drivers belonging to Suyang Logistics joined the Cargo Truckers Solidarity. These truckers began a strike at two of the company's plants in Icheon, Gyeonggi Province, and Cheongju, North Chungcheong Province, to demand trucking rate hikes.

With no progress in negotiations, the 132 truck drivers were notified of contract termination in June, and Hite Jinro applied for an injunction to prohibit the obstruction of business at the Icheon and Cheongju plants, and filed a damages suit against some of the drivers.

In response, the Cargo Truckers Solidarity held protest rallies at the two plants, attended by some 700 members, on July 22 and 23, and began a new rally at the company's plant in Hongcheon, Gangwon Province, on Aug. 2.