SEOUL, Aug. 24 (Yonhap) -- South Korea will make their 10th consecutive FIFA World Cup appearance this year in Qatar, a streak matched by few others. But the Taeguk Warriors have only reached the knockout stage twice so far.

Two of the country's biggest football legends, Cha Bum-kun and Park Ji-sung, believe South Korea will get there for the third time in 2022. 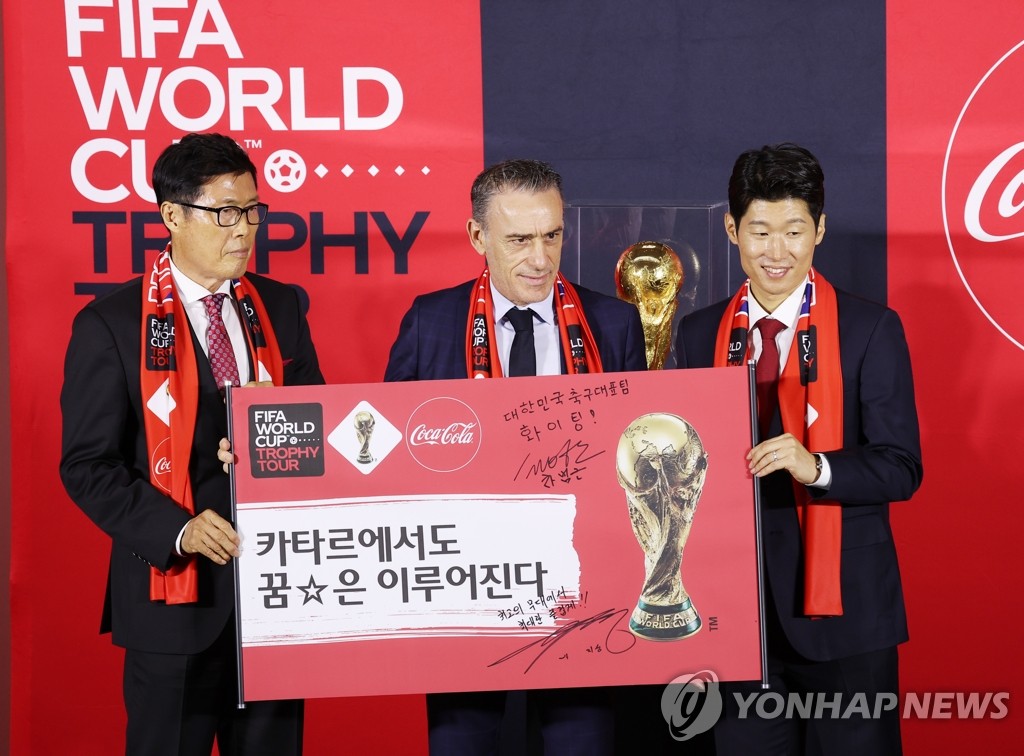 Cha and Park were part of the media showcase of the FIFA World Cup Trophy in Seoul on Wednesday, as the global tour of the trophy made its first Asian stop in the South Korean capital.

Cha, the country's all-time male leader with 136 caps and 58 goals, played at the 1986 World Cup, the starting point of the current appearance streak. Park, who retired with 100 caps, represented South Korea at three consecutive World Cups starting in 2002. He was an integral part of the 2002 team that memorably reached the semifinals on home soil, and is tied for the most career World Cup goals by a Korean player with three.

Asked to predict how far South Korea can go this year, Cha, who has enjoyed a successful post-playing career as a television analyst, said he has big expectations.

"When pundits or experts make predictions for the World Cup, they are usually off the mark, but it is always good to dream big," Cha said. "I hope South Korea can reach the quarterfinals in Qatar." 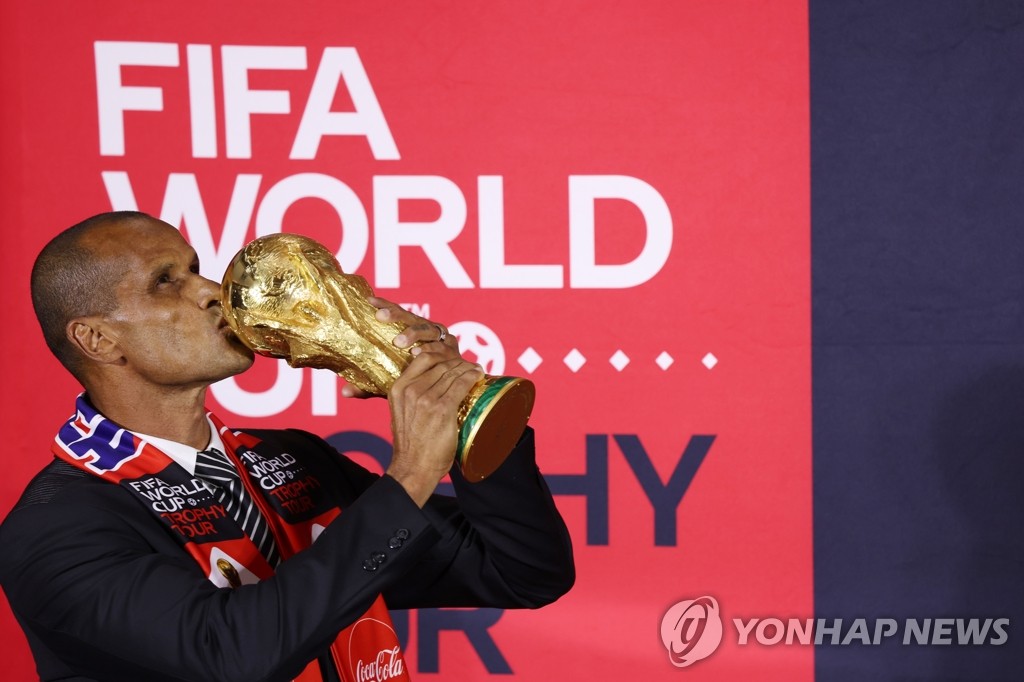 Park wasn't as bold with his prediction. With the 28th-ranked South Korea paired with Portugal (No. 9), Uruguay (No. 13) and Ghana (No. 60), the former national team captain said, "Objectively speaking, it will be tough for us to make it to the round of 16."

But Park noted that few, if any, had predicted South Korea would march into the semifinals in 2002.

"They say the ball is round, and it's really up to how hard the team will work the rest of the way," Park said. "With the support of our fans here, I think a trip to the round of 16 is possible."

Cha was South Korea's greatest player during his playing days in the 1970s and 1980s. Park carried that torch starting in the early 2000s. Today, there is hardly any doubt that Son Heung-min, the reigning Premier League Golden Boot winner with Tottenham Hotspur, fits that billing as the greatest South Korean football player for this generation, or even maybe all time. 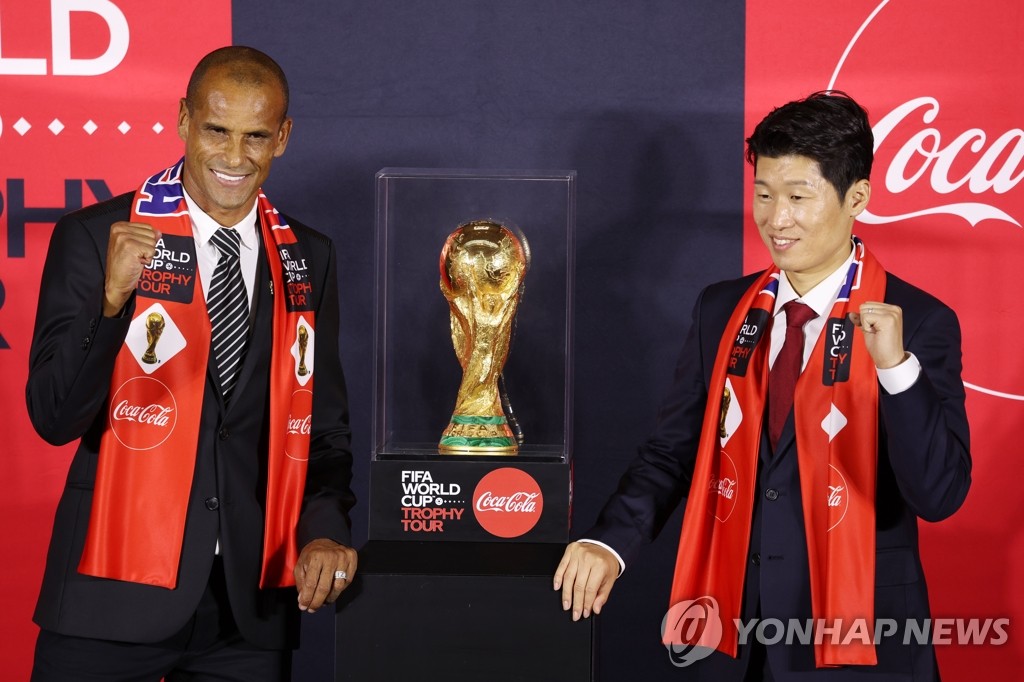 Son is one goal away from breaking a tie with Park as South Korea's World Cup leading scorer.

"Heung-min scored once at his first World Cup (in 2014) and then had two goals at his second World Cup," Park said. "Since this will be his third appearance, I think he will net three goals and give us a lot to cheer about. And obviously, the record will be his."

Former Brazil international Rivaldo was also on hand for the trophy unveiling event as FIFA's global ambassador. Rivaldo, who helped Brazil win the 2002 World Cup, recalled the unlikely run enjoyed by South Korea that year, and said there is no reason the country won't repeat that feat this year.

"This year, South Korea have a great coach and great players," Rivaldo said, standing next to the trophy. "I think they will be able to recapture that glory and return to the semifinals."

That coach Rivaldo was referring to is Paulo Bento, who has been in charge since the fall of 2018 and will be coaching at his first World Cup with South Korea.

"It's everyone's dream to win at the World Cup, and we are working hard toward that dream," Bento said. "We hope we can show everything that we've worked on so far." 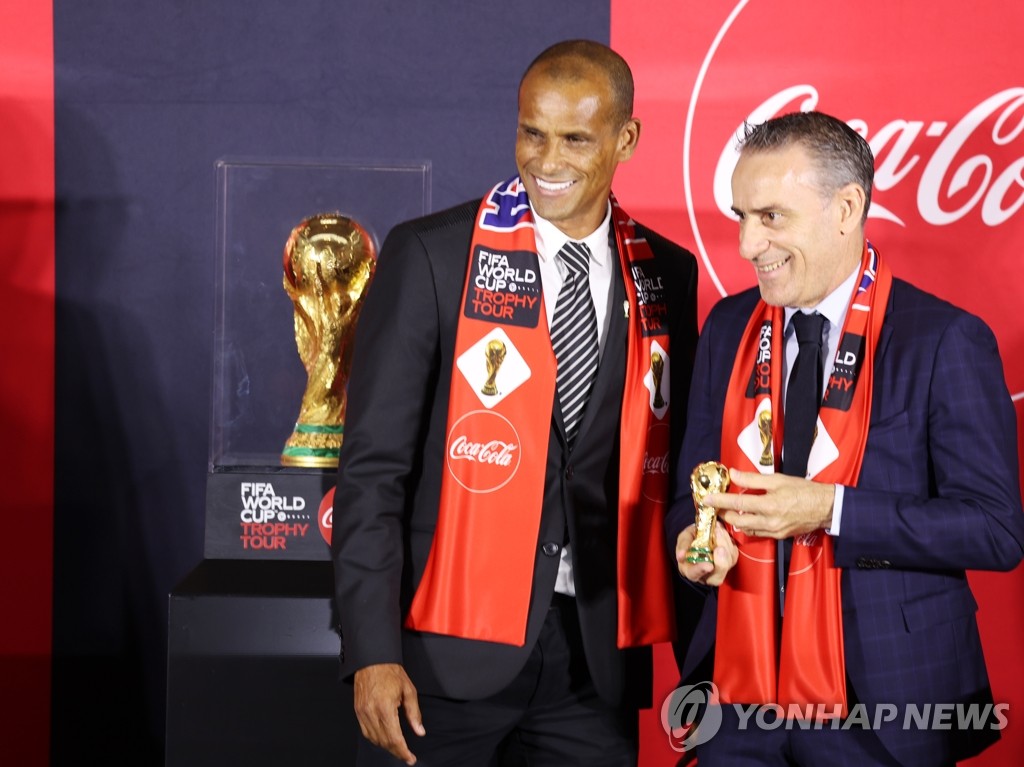