SEOUL, Aug. 24 (Yonhap) -- Unification Minister Kwon Young-se met Wednesday with China's top envoy in South Korea to discuss North Korea and other pending issues as the neighboring countries marked the 30th anniversary of the establishment of diplomatic relations, according to Kwon's office.

During his meeting with Ambassador Xing Haiming, Kwon stressed that his ministry will closely communicate with China in pushing ahead with the policies of the Yoon Suk-yeol administration on denuclearization and improving inter-Korean relations.

They agreed on the need to prevent the situation on the Korean peninsula from getting worse and agreed to continue to strengthen cooperation, the ministry said.

Kwon also urged the Chinese government to play a "constructive role" to draw out a positive response from Pyongyang on Yoon's "audacious plan," which seeks to help the North improve its economy in return for denuclearization steps.

The envoy emphasized that China is making "great efforts" to achieve peace and denuclearization of the Korean Peninsula, it added. 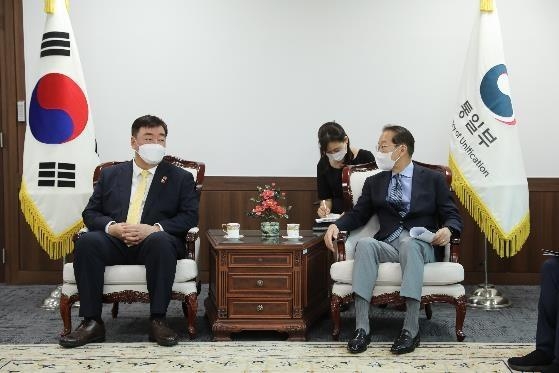