SEOUL, Aug. 25 (Yonhap) -- An artist management company established by world famous singer Psy has come under investigation by the labor ministry over the death of an outsourced worker during the dismantling of facilities after a Psy concert, officials said Thursday.

The ministry's Gangwon Province branch office began a raid on P Nation's head office in southern Seoul and its subcontractors around 9:30 a.m., the officials said.

On July 31, a male Mongolian worker in his 20s, who was hired by one of P Nation's subcontractors, died in a fall while taking part in the dismantling of stage facilities for Psy's water-shower concert, dubbed "Drenched Show," in Gangneung, an east coast city in Gangwon Province.

It has been known that the fatal accident occurred while the man was working without adequate safety equipment despite rainy, inclement weather. 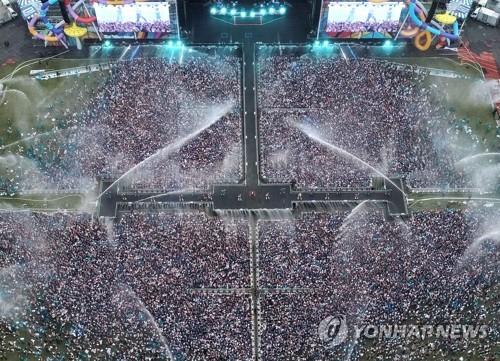 According to the Industrial Safety and Health Act, work must stop when the weather is very bad due to rain, snow or other unstable conditions.

The labor ministry has reportedly obtained a search and seizure warrant from the court for P Nation on charges of violating the industrial safety law.

The ministry may also leave open the possibility of investigating P Nation on charges of violating the Serious Disaster Punishment Act that took effect in January this year, the officials said.

Psy controls 60 percent of P Nation but the company is now headed by another person surnamed Kim. Therefore, the officials speculate that the possibility of the singer being booked in connection with the worker's death appears to be slim despite the ongoing investigation.

Psy, who won international fame with his hit song "Gangnam Style" a decade ago, has returned with a new album this year and held the drenched show concerts, in which the audience is splashed with a large amount of water, in Seoul, Busan, Incheon, Daegu, Gangneung and other major cities nationwide this summer.