The agreement was made during the 17th Korea-China Meeting on Economic Cooperation held virtually between South Korea's Finance Minister Choo Kyung-ho and He Lifeng, the minister in charge of China's National Development and Reform Commission.

Under the Memorandum of Understanding (MOU) signed during the meeting, Seoul and Beijing agreed to set up the new director-level entity on supply chains, which is meant to discuss related issues "in time" when any supply disruptions take place and to enhance policy consultations, according to the ministry.

It is the first MOU of its kind between the two neighboring nations.

"The two sides also vowed to strengthen cooperation in new industry fields, such as the hydrogen industry. South Korea asked for the Chinese government's extra attention to ensure stable and predictable environments for corporate activities," the ministry said in a release.

The ministers also vowed to make joint efforts for the development of their service industries by carrying out various joint research projects and deepening communications.

Seoul called for actual progress in their service and investment negotiations under the bilateral Free Trade Agreement (FTA), particularly in such sectors as cultural content and game industries, and China proposed stronger cooperation in healthcare and sporting fields, according to the ministry.

Choo also sought China's support for South Korea's bid to host the 2030 World Expo in Busan, according to the ministry. The Seoul government finalized detailed documents for the bid this week.

The previous session of the ministerial meeting was held in October 2020 via teleconferencing, and the next meeting will take place in South Korea in 2023, the ministry said. 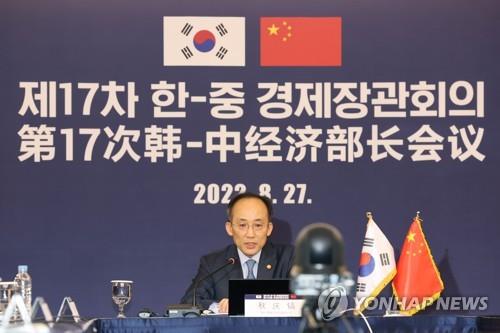