(ATTN: UPDATES with market reaction throughout)

SEOUL, Aug. 29 (Yonhap) -- The South Korean currency on Monday sank below the 1,350 level against the U.S. dollar for the first time in more than 13 years as the Federal Reserve's hawkish monetary policy stance boosted demand for the greenback.

Powell said the Fed will raise interest rates "for some time" to tame inflation and the move could bring "some pain" to households and businesses with slower growth and job losses. 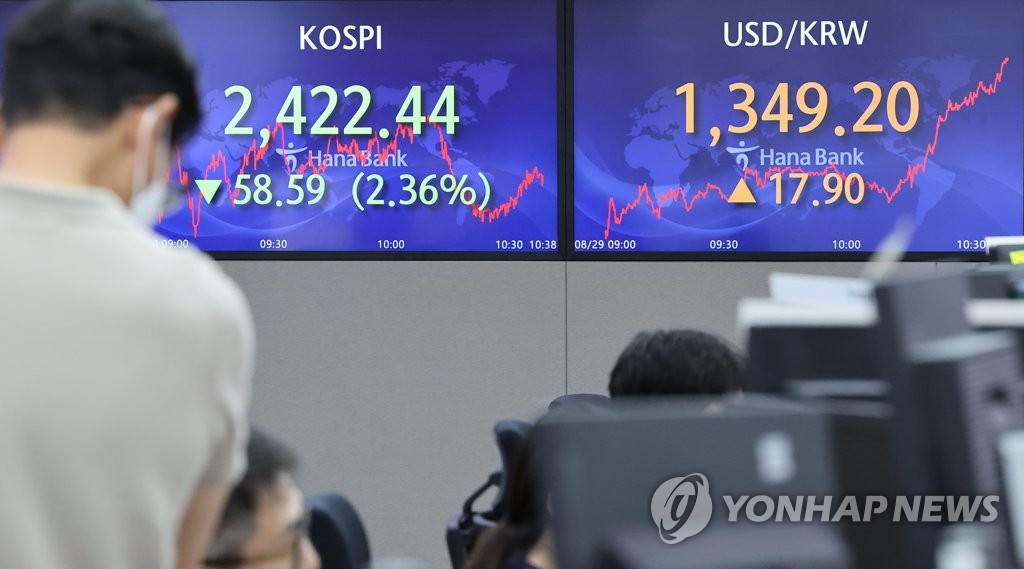 The local currency fell below the 1,350 level per dollar just about one week after it slid through the 1,340 mark for the first time in more than 13 years Tuesday. The won has declined nearly 12 percent against the dollar so far this year.

Earlier in the day, First Vice Finance Minister Bang Ki-sun said the government plans to beef up its policy efforts to stabilize the financial market to brace for excessive herd behavior in the wake of the Jackson Hole meeting.

"As South Korea's financial market is deeply coupled with movements in U.S. and other major markets, there is a need for close monitoring and responses," Bang said at a meeting on markets.

He said the government will closely monitor Korea's currency and bond markets with "extra" caution.

Lee Bok-hyun, head of the Financial Supervisory Service, a financial regulator, held a meeting to discuss the impact of the Fed's chair's remarks at the Jackson Hole meeting and vowed to intensify monitoring of market situations that have shown a "complicated" and "prolonged" tendency of volatility that warrants closer cooperation among relevant agencies.

He, however, noted that the local financial sector is strong enough to weather external risks given that its asset health and dollar liquidity have improved significantly in the process of experiencing past crises.

The won's slide has accelerated in recent months as the Fed has swiftly and aggressively raised its key interest rates.

In July, the Fed raised the federal funds rate by 75 basis points for the second straight month in a bid to put a lid on inflation.

The finance ministry said last week it will buy back Treasury bonds and take steps to help curb a rise in bond yields, when needed, if the bond market shows jitters.