SEOUL, Aug. 30 (Yonhap) -- The Supreme Court on Tuesday ruled that the state is liable to compensate victims of a now-defunct presidential decree enforced in the 1970s during the presidency of the late Park Chung-hee to crack down on anti-government activists.

The top court made the ruling after an en banc session in a compensation lawsuit filed against the state by 71 people, who were arrested and served prison terms for violating the Presidential Emergency Decree No. 9, and their heirs. 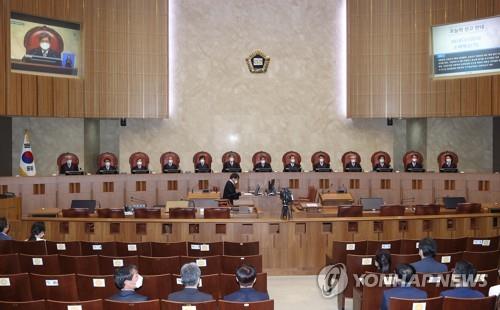 The Park government issued the Presidential Emergency Decree No. 9 in May 1975 to prohibit all politically motivated group activities and gatherings, including anti-government demonstrations by students. Violators would be punished by imprisonment of more than one year.

Park, who ruled the nation from 1961-1979 after seizing power in a military coup, had earlier declared eight other emergency decrees based on the so-called Yushin (renewal) Constitution introduced in 1972 to remain in power permanently.

Tuesday's ruling is a direct reversal of the top court's previous verdict reached seven years ago on the state's liability to the victims of the same decree.

In 2013, the Constitutional Court declared Park's Emergency Decrees No. 1, 2 and 9 as unconstitutional, saying the measures infringed the basic rights of citizens, such as freedom of expression and assembly and political suffrage.

The Supreme Court also ruled in the same year that the Presidential Emergency Decree No. 9 was invalid due to its infringement of people's basic rights.

In March 2015, however, the Supreme Court refused to recognize the state's liability for compensation to the victims of the emergency decree No. 9, saying the decree was only a political act of the state and thus cannot be seen as an illegal act under civil law. But some lower courts have since issued verdicts that are different from that of the top court.

The Supreme Court began deliberations on the latest compensation lawsuit in February 2018 after it was dismissed by lower courts on the basis of the 2015 Supreme Court ruling.

The top court ruled in favor of state compensation, saying the emergency decree No. 9 violated people's basic rights and can be seen as an illegal act under civil law.

It then ordered the Seoul High Court to retry the case.

"State actions ranging from the issuance and execution of emergency decree No. 9 were illegal due to the absence of objective legitimacy by public officials enforcing the decree," the top court said.

"Thus state liability for compensation can be recognized for damage suffered by individual citizens who underwent forced investigations or were convicted and served prison sentences under emergency decree No. 9," it said.

Keywords
#Supreme Court emergency decree No. 9
Issue Keywords
Most Liked
Most Saved
Most Viewed All Categories
Most Viewed More
Most Viewed Photos