SEOUL, Aug. 30 (Yonhap) -- South Korea seeks to expand its generation of nuclear power to nearly 33 percent of its total energy creation by 2030 in a move to boost energy security and to better meet net-zero goals, the industry ministry said Tuesday.

Under the blueprint for the country's electricity supply through 2036, the government plans to produce 201.7 terawatt hours (TWh) with nuclear power generation by 2030, which will account for 32.8 percent of the country's total.

The previous version of the mid-term plan put the ratio at 25 percent, and the actual figure for last year was 27.4 percent, according to the Ministry of Trade, Industry and Energy.

The growth in the ratio would be possible as the government plans to resume the construction of the Shin-Hanul No. 3 and No. 4 nuclear reactors and continue operations of existing reactors, it added.

According to the plan, renewable energy will take up 21.5 percent of the country's total electricity generation by 2030, with the figure for coal standing at 21.2 percent and liquefied natural gas at 20.9 percent.

It will be finalized after due environmental assessment, public hearings and consultations with ministries concerned, the industry ministry said.

"The government seeks to come up with more practical measures to cut emissions," a ministry official said. 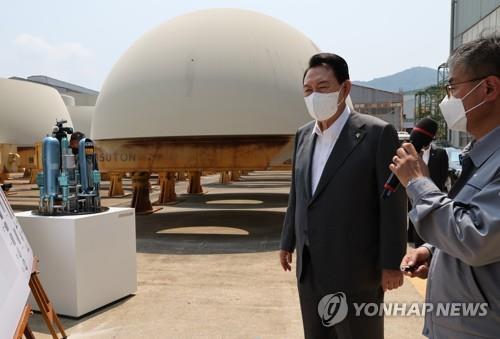 S. Korea to expand nuclear power generation to about 33 pct of total by 2030

S. Korea to expand nuclear power generation to about 33 pct of total by 2030