Kim made the remarks as he left for Hawaii for talks with his U.S. and Japanese counterparts, Jake Sullivan and Takeo Akiba, respectively, Thursday in the first such meeting since the launch of the Yoon Suk-yeol administration in May.

"The meetings will be quite timely and meaningful, given the grave security circumstances of the Korean Peninsula," Kim told reporters. "The gatherings are expected to serve as a chance to seek ways to effectively respond to evolving security threats by North Korea's nuclear and missile programs." 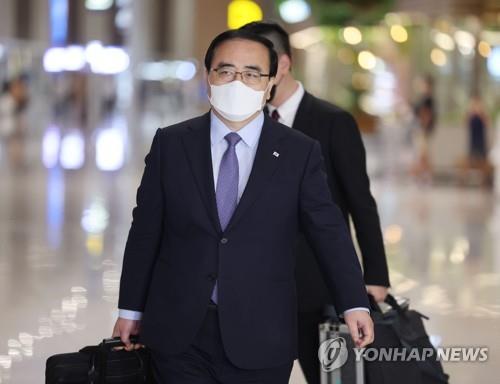 The officials will also have talks on how to encourage Pyongyang to accept South Korea's "audacious plan," in which Seoul offered to carry out massive food assistance and infrastructure projects in the North if Pyongyang demonstrates its commitment to denuclearization.

Earlier this month, President Yoon Suk-yeol made the proposal in his Liberation Day address, but North Korea has reacted negatively, calling the proposal the "height of absurdity."

Also on the table would be the U.S.' Inflation Reduction Act, Kim said. The law, signed by U.S. President Joe Biden earlier this month, has sparked concerns in South Korea and elsewhere, as it excludes electric vehicles assembled outside North America from tax incentives.

Earlier in the day, the presidential office said in a statement that the three will have "in-depth discussions" on the North Korea issue, trilateral cooperation, economic security, and key regional and international issues.

Kim will also have separate bilateral meetings with Sullivan and Akiba to discuss areas of mutual interest, it said.