The meeting between Lee and PPP floor leader Kweon Seong-dong marked their first since Lee was elected the DP's new chairman in a national convention Sunday with an overwhelming 77.77 percent of the vote from party members.

During the meeting, Kweon called for opposition support for efforts to carry out campaign pledges that both parties put forward during the presidential election earlier this year, in which Lee lost to President Yoon Suk-yeol by a thin margin.

Cooperation from the DP is key to passing any bills as the party holds 169 out of 299 parliamentary seats.

Lee and Kweon displayed differences on other issues, such as the ruling party's efforts to lower the comprehensive real estate holding tax and next year's budget

Earlier in the day, Lee also paid a visit to the National Assembly Speaker Kim Jin-pyo and discussed the role of the main opposition party and the need for bipartisan cooperation. 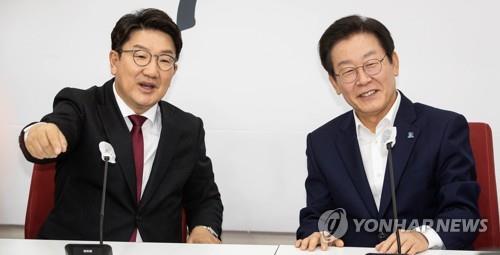