SEOUL, Aug. 31 (Yonhap) -- Speculation is mounting over how the South Korean government would secure a huge sum of nearly 300 billion won (about US$224 million) to compensate U.S. private equity firm Lone Star Funds over its sale of the now-defunct Korea Exchange Bank, as ordered by an international tribunal.

The International Centre for Settlement of Investment Disputes (ICSID) ordered Seoul on the day to pay damages of US$216.5 million plus interest estimated at around $13.8 million to Lone Star, though the government here refused to accept the decision and vowed to seek the annulment of the order. 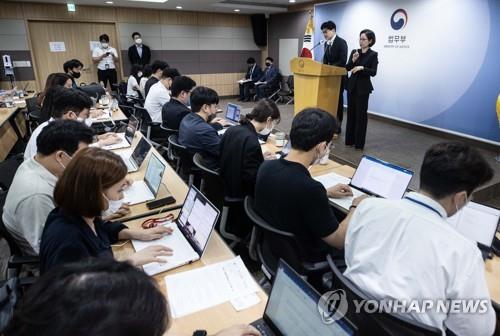 The amount of compensation for Lone Star, if finalized, is converted into about 280 billion won in terms of the won-dollar exchange rate of 1,300 won, with the interest payment estimated at 18.5 billion won.

The South Korean government may have no choice but to withdraw the entire compensation money from state coffers, as the possibility of it requesting the right to indemnity from other institutions or individuals, including public officials related to the Lone Star deal, appears to be low, according to experts and watchers.

Aware of such a concern, Minister of Justice Han Dong-hoon said that not a single penny of taxpayer money should be wasted, while announcing the government's decision not to accept the ICSID order in a news conference.

There is also a possibility that the government may pursue discussions with Lone Star on the installment payment of the compensation, the experts and watchers said.

When the details of the payment are finally decided, the government should determine how to secure the money through the budget.

The money is expected to come from the government's reserve funds or the budget related to the justice ministry, while the possibility of a supplementary budget being formulated appears to be low.

There is no precedent for the South Korean government to pay several hundreds of billions of won in compensation due to a ruling from the ICSID.

In 2018, the ICSID ruled in favor of Iranian firm Dayyani and ordered Seoul to pay 73 billion won in compensation over a failed takeover of Daewoo Electronics.

Dayyani, a major shareholder of Entekhab Industrial Group, went to the ICSID after South Korea's state-run Korea Asset Management Corp. (KAMCO) canceled a contract to sell a major stake in Daewoo Electronics to Entekhab in 2011.

The ruling was finalized in December 2019 and Seoul paid 61.4 billion won of the total, including some 50 billion won from KAMCO, to the Iranian firm in April this year.

Compensation to Lone Star likely to be withdrawn from state coffers

Compensation to Lone Star likely to be withdrawn from state coffers