SEOUL, Aug. 31 (Yonhap) -- An exhibition on K-pop sensation BTS' first nine years since its debut in 2013 will be held in Seoul and the southern port city of Busan, organizers said Wednesday.

The "2022 BTS Exhibition: Proof" displays photos, materials, videos and various other types of content showing the past, present and future of the globally popular band, according to Hybe, the entertainment company that has BTS' agency Big Hit Music under its wing.

The event will be held at Hybe Insight in Seoul from Sept. 28 to Nov. 22 and on the first floor of LCT in Busan, 325 kilometers southeast of Seoul, from Oct. 5 to Nov. 8.

"It will be a place to remember the records and moments that BTS has achieved by proving its value through music," the company said. "The records of BTS and Army, who have walked together filling each other's empty spaces, will unfold like a chronicle," it added, referring to the name of the band's global fan base.

The septet is scheduled to hold a concert in Busan in front of 100,000 spectators on Oct. 15 to support the city's bid to host the World Expo in 2030. 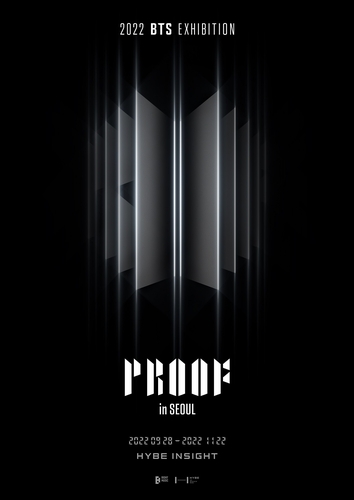