The Inflation Reduction Act (IRA), signed by U.S. President Joe Biden earlier this month, calls for the expansion of tax subsidies for EV purchases, but only for those assembled in North America.

Concerns over its discriminatory nature have mounted in South Korea, as its carmakers, including Hyundai Motor Co. and Kia Corp., make their flagship EV models at domestic plants and ship them overseas.

During the meeting, Lee delivered concerns from the Seoul government and businesses, and asked for active bilateral consultations to resolve the issue.

"The bilateral economic ties, particularly in terms of supply chains and advanced technology fields, have deepened, and South Korean firms have made huge investments in the U.S., but such discriminatory measures are feared to have adverse impacts," Lee told the U.S. envoy.

He also noted this law could be in violation of international trade norms. The Seoul government has said the IRA runs against the bilateral Free Trade Agreement and World Trade Organization rules.

"The two nations could find solutions through in-depth discussions," Lee said, adding he is planning to visit the U.S. next month for talks with officials there on the matter.

South Korea sent a government delegation to the U.S. earlier this week, and Trade Chief Ahn Duk-geun is scheduled to visit the U.S. next week.

It is not immediately known what the U.S. ambassador said during Wednesday's meeting.

On Monday, Goldberg said the law is meant to deal with issues of climate change, and to promote the use of EVs and batteries, not aimed at South Korea, and that the U.S. will "try all we can to overcome any differences."

On Tuesday (Washington time), the office of the U.S. Trade Representative said the two nations agreed to "keep in close contact on this issue over the coming weeks." 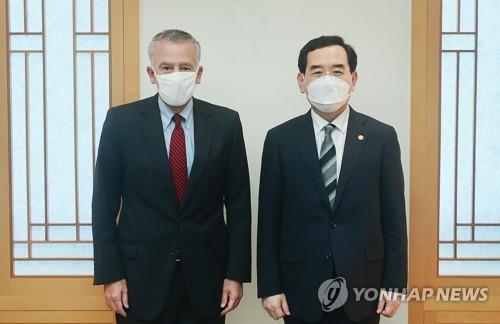