SEOUL, Sept. 1 (Yonhap) -- A major South Korean business lobby has urged the United States to allow exceptions for Korean-made electric vehicles to its new law excluding EVs made outside of North America from tax benefits, saying it will be a setback for Korean automakers investing big in the region.

The Federation of Korean Industries (FKI) made the call in a letter sent Thursday (Seoul time) to U.S. President Joe Biden and five key federal departments, as Seoul is seeking to create room for Washington to reconsider the tax credit provisions in the Inflation Reduction Act (IRA) in favor of the South Korean auto industry.

"Automobile manufacturers are set to lose out on EV tax credits for those EVs assembled outside of North America," FKI Chairman Huh Chang-soo said in the letter, also sent to U.S. Congress and governors of the states of Georgia, Alabama and Michigan.

"This would be a setback to all your efforts to engage our two regions, solidify and strengthen economic partnerships," he said. "It is my hope that automobile manufacturers, such as Hyundai and Kia, will receive a reprieve on treatment that runs counter to the principles of the U.S.-Korea FTA and World Trade Organization's agreement of subsidies."

The IRA, signed into law by Biden on Aug. 16 (U.S. time), calls for an expansion of tax subsidies for EV purchases, but only for those assembled in North America. It also includes provisions barring EVs from the tax credits if they are equipped with battery components made using minerals produced in China. 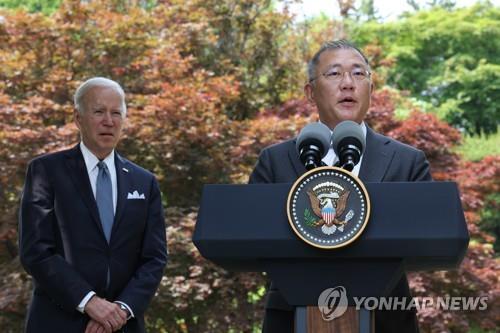 South Korea has voiced concerns over the new law, stressing that its discriminatory nature will put its carmakers, like Hyundai Motor Co. and Kia Corp., at an unequal footing in the U.S. market, as they manufacture their flagship EVs at domestic plants and ship them overseas.

Huh said the law will make about 70 percent of 72 EV models that were previously eligible for the tax credit now more expensive for American consumers.

He pointed out it would be "unfair" for carmakers, like Hyundai Motor, that are "making strides to invest in America, bring new jobs into the workforce and help the U.S. on its way to your administration's goal of reducing carbon emissions."

Hyundai Motor has pledged to invest US$5.5 billion to build an EV and EV battery plant in Georgia.

A South Korean government delegation visited Washington this week to discuss the issue with the U.S. side. Trade Minister Ahn Duk-geun and Industry Minister Lee Chang-yang are scheduled to make back-to-back visits to Washington in the coming weeks for talks with their counterparts on the matter.

Seoul has proposed forming a formal channel to discuss the concerns regarding the tax credits under the IRA, and Washington has given a positive response, Deputy Trade Minister Ahn Sung-il told reporters during the delegation's visit Wednesday.