SEOUL, Sept. 1 (Yonhap) -- Korean Air Lines Co. said Thursday it has received "unconditional" regulatory approval from Australia for its integration with Asiana Airlines Inc. in a move that could speed up its process to absorb the smaller domestic rival.

In January last year, Korean Air submitted documents to antitrust regulators in 14 countries for the review of its combination with Asiana.

The company has received approval from nine countries -- Australia, South Korea, Singapore, Vietnam, Thailand, Turkey, Taiwan, Malaysia and the Philippines – so far for the integration while awaiting the go-ahead from five countries -- China, Japan, Britain, the European Union and the United States.

In November 2020, Korean Air signed a deal to acquire the controlling stake in Asiana in a deal valued at 1.8 trillion won (US$1.5 billion) that would create the world's 10th-biggest airline by fleet.

The nation's two full-service carriers account for a combined 40 percent of passenger and cargo slots at Incheon International Airport, South Korea's main gateway, below the level that constitutes a monopoly.

Korean Air said it aims to launch a merged entity with Asiana in 2024 after completing a takeover process by next year, vowing to streamline their routes and reduce maintenance costs.

The two airlines have suspended most of their flights on international routes since March 2020, as countries have strengthened their entry restrictions to stem the spread of the COVID-19 pandemic.

The national flag carrier aims to gradually bring the number of flights on its international passenger routes to 50 percent of pre-pandemic levels by September from the current 30 percent. 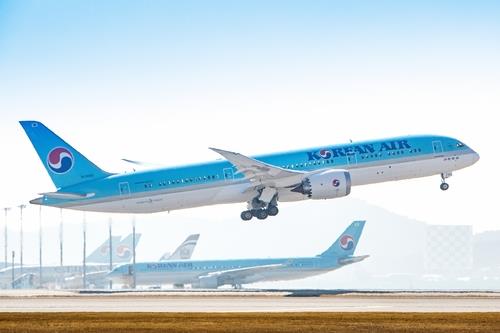