SEOUL, Sept. 2 (Yonhap) -- President Yoon Suk-yeol declined to comment on the prosecution's summons of main opposition leader Lee Jae-myung on Friday, saying he is focusing on the economy and does not have time to properly read the news.

Yoon's comment came a day after the prosecution asked Lee of the main opposition Democratic Party (DP) to appear for questioning by next Tuesday as part of an investigation into allegations he lied during the presidential campaign last year.

"Well, as president, my current priorities are the economy and people's livelihoods," Yoon told reporters as he arrived for work. "Like all of you, I learn about criminal cases through news reports, but I don't even have time to thoroughly read articles." 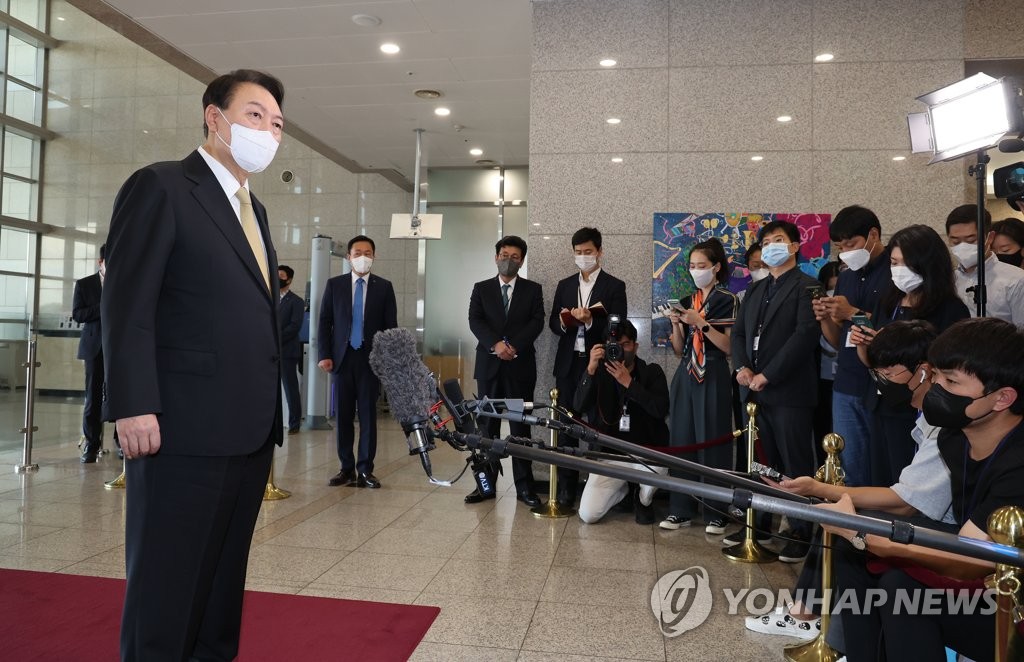 Lee is under investigation on suspicion of violating the election law by making an allegedly false claim about a controversial 2015 land development project last October when he was the DP presidential candidate.

Lee told a parliamentary session at the time that the developer of the Baekhyeon-dong project in Seongnam, just south of Seoul, was given special treatment at the request of the land ministry, but the then opposition People Power Party (PPP) disputed the claim, saying the favor was voluntarily awarded by the Seongnam municipal government when Lee was the city's mayor.

Lee is also accused of making a false statement about a development scandal in Seongnam's Daejang-dong district that centers on allegations that the city government made dubious arrangements that allowed an asset management firm to collect astronomical profits from the project.

Lee said during a media interview in December that when he was Seongnam's mayor, he did not know Kim Moon-ki, who took care of the Daejang-dong project as an official of Seongnam Development Corp. under the city government.

But a civic group accused Lee of lying, saying the two went on an overseas trip together when Lee was mayor and filed a complaint asking the prosecution to investigate Lee on charges of spreading false information ahead of the presidential election.

Lee, who lost to Yoon in the March presidential election by a razor-thin margin of 0.73 percentage point, was elected chairman of the DP in a landslide vote Sunday.

Yoon's PPP, meanwhile, has been without a leader for weeks following the suspension of former Chairman Lee Jun-seok over allegations of sexual bribery and a cover-up.

When asked to comment on the ongoing turmoil within his party, Yoon maintained that he believes it is inappropriate for a president to involve himself in party affairs.

"I expect and trust that our party will overcome the difficult issues through democratic governance," he said.