Combined sales at duty-free shops in Asia's fourth-largest economy stood at 1.25 trillion won (US$920 million)) in July, down 14.6 percent from a month earlier, according to the Korea Duty Free Shops Association.

It marked the lowest monthly tally since January this year, when sales reached 1.08 trillion won.

Spending by foreigners, especially Chinese vendors, plunged about 16 percent on-month to 1.12 trillion won in July. Their spending accounts for the bulk of South Korea's duty-free sales.

The tumble came as Chinese vendors cut back on their purchases amid a slowing Chinese economy and the impact of Beijing's coronavirus lockdowns of Shanghai and other major cities.

Spending by local shoppers edged up to some 130.6 billion won in July from 129.9 billion won the prior month.

The number of domestic visitors hit a yearly high of more than 830,000 in July, according to the data. 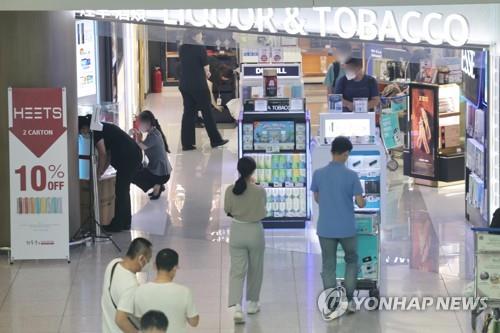