SEOUL, Sept. 2 (Yonhap) -- President Yoon Suk-yeol met with the visiting governor of Arizona on Friday and asked for his cooperation in addressing South Korea's concerns about the U.S. Inflation Reduction Act (IRA), the presidential office said.

Yoon's meeting with Gov. Doug Ducey came amid growing concerns that the IRA will act as a significant trade barrier for Korean-made vehicles as the law excludes electric vehicles assembled outside North America from tax incentives.

"President Yoon said that our businesses in the battery and other advanced industry sectors are expanding in Arizona and across the United States and increasing investments, and asked for the interest and support of the U.S. federal government and the state government for these firms," the presidential office said in a press release.

"In particular, President Yoon asked that as our firms have large concerns about the recently enacted Inflation Reduction Act, that the state government also make active efforts to ensure our businesses there can receive the same benefits as U.S. firms without discrimination," it said.

Ducey said he is taking a great interest in and providing support to strengthen cooperation between South Korea and Arizona, and hopes to see the further expansion of cutting-edge South Korean companies in his state.

He also promised to make active efforts not only at the state level but also with members of Congress to ensure South Korean firms receive the same benefits as U.S. firms without discrimination, according to the presidential office.

The IRA calls for the expansion of tax subsidies for purchases of EVs, but only those assembled in North America, leading to concern it will hurt South Korean carmakers, such as Hyundai Motor Co. and Kia Corp., that make their flagship models at domestic plants and ship them overseas.

Yoon further asked the governor to help South Korean businesses operating in Arizona to invite professionals from South Korea to work for them when necessary and in a timely manner, and to take a special interest in the growth of the local Korean community and the enhancement of their rights and interests.

Ducey responded that he will support and work on both issues, the presidential office said. 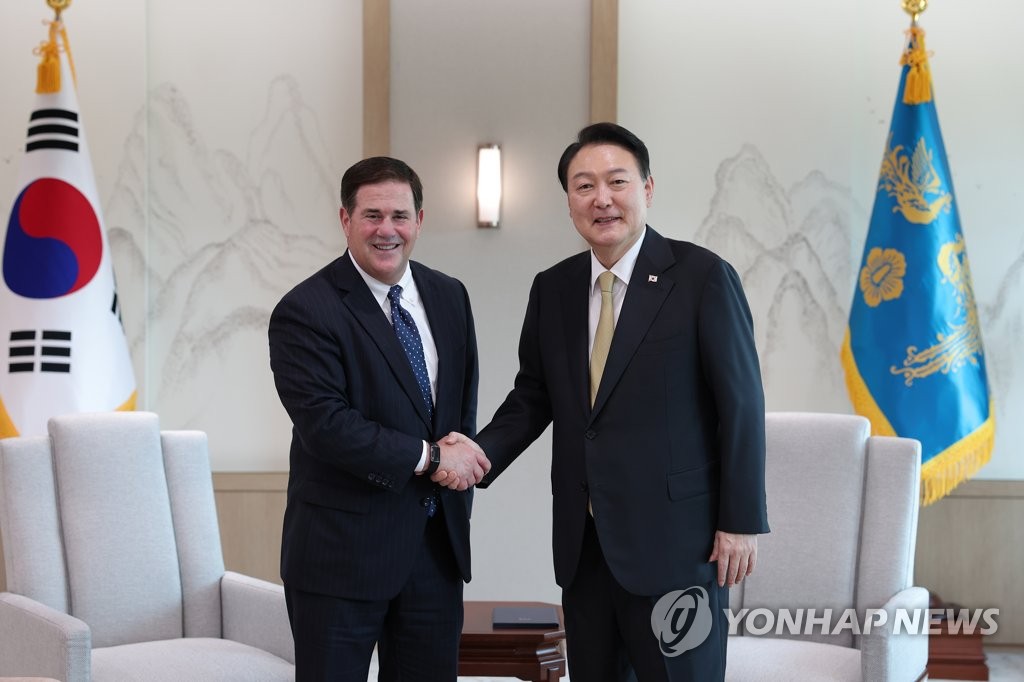