SEOUL, Sept. 5 (Yonhap) -- Super Typhoon Hinnamnor neared South Korea on Monday, forcing cancellations of hundreds of flights and prompting schools to switch to remote learning as the entire nation went on high alert for what could the most powerful storm ever to hit the country.

The typhoon, the 11th this year, is forecast to edge close to the southern island of Jeju at around midnight and reach the southern coastal region of South Gyeongsang Province around 5-6 a.m. Tuesday, according to the Korea Meteorological Administration (KMA).

When it nears South Korea, Hinnamnor is expected to be the strongest typhoon ever to make landfall in the country, with an atmospheric pressure of 950 hectopascals at its center, according to the KMA

"Hinnamnor is a very big typhoon with a radius of 400 kilometers, and can carry strong winds and heavy rainfall almost all across the country," Han Sang-un, the chief forecaster at the KMA, told a press briefing, urging to minimize possible casualties.

As of 3 p.m. Monday, the typhoon was located 270 kilometers south-southwest of Jeju's Seogwipo, moving north-northeast at a speed of 33 kilometers per hour, with an atmospheric pressure of 935 hectopascals.

The speed is faster than an earlier estimate of 12 km per hour, and the typhoon is classified as a "very strong" one packing a maximum sustained wind speed of 50 meters per second.

Typhoons are classified into four categories: medium, strong, very strong and super strong. Super strong refers to typhoons with a maximum wind speed of at least 54 meters per second. 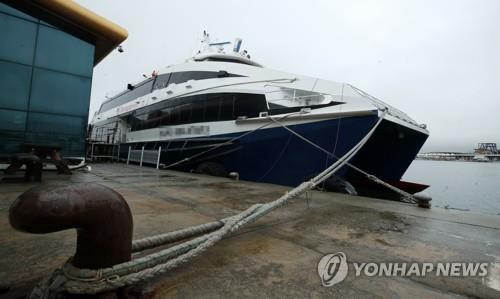 After brushing past Jeju, Typhoon Hinnamnor is forecast to gain momentum to make landfall 80 km north-northwest of the southern port city of Busan by 9 a.m. Tuesday, with an atmospheric pressure of 955 hectopascals at its center, according to the KMA.

The typhoon's strength when it reaches Busan is forecast to weaken to "strong," although it is expected to become the strongest typhoon ever to make landfall in South Korea.

Hinnamnor is forecast to maintain its strength after passing through the Korean Peninsula, the KMA said.

A heavy rain warning was issued for all parts of the country until Tuesday, the KMA said.

The country is expected to receive an accumulated rainfall between 100 and 300 millimeters on Monday and Tuesday, with the mountainous areas of Jeju and some southern coastal regions receiving more than 600 millimeters and 400 millimeters, respectively, the KMA said.

The typhoon could also bring record strong winds, with the KMA forecasting maximum speeds of 40 to 60 meters per second in Jeju and other lower coastal areas between Monday night and Tuesday.

The current record is 63.7 meters per second measured in the eastern coastal city of Sokcho on Oct. 23, 2006.

No casualties have been reported from the effects of Typhoon Hinnamnor so far.

The Central Disaster and Safety Countermeasures Headquarters' emergency response posture was upgraded to the highest level as of 4:30 p.m. Sunday for the first time in five years in terms of the typhoon response.

Almost all of schools on Jeju Island were closed. Many others in the country's southern region, including in the southern port city of Busan, are expected to close down for remote learning.

A series of ferry services and flights were canceled across the country.

Across the country, a total of 361 domestic flights had been cancelled as of Monday afternoon, according to airport authorities.

Out of 67 domestic flights leaving the Gimpo International Airport in western Seoul, as of 9 a.m. Monday, 13 had been cancelled, according to the Korea Airports Corporation. 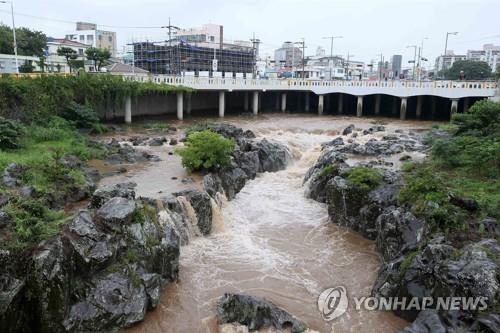