Ahn said the new U.S. law, which Seoul believes violates the Korea-U.S. free trade agreement, will be an important test for the two countries and their trade relations.

"The IRA is an issue that will be a very important touchstone for trade relations between South Korea and the U.S.," Ahn said after arriving in Washington.

"(We) will do out utmost to find a solution so that such an incident will not be repeated in the future while South Korea and the U.S. build their trade environment," he added. 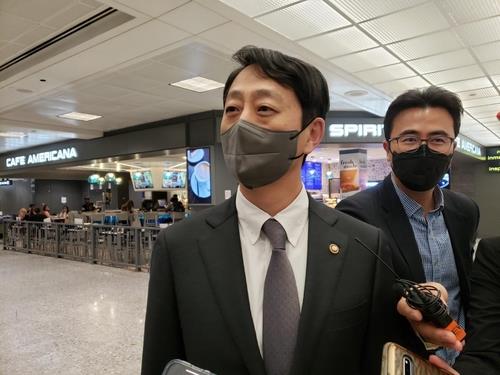 The IRA was signed into law last month, offering a government tax credit of up to US$7,500 to each buyer of an electric vehicle assembled in North America, excluding all EV imports from other countries, including South Korea, from such benefits.

Seoul officials have said the new U.S. law violates the Korea-U.S. free trade agreement, which promises the equal treatment of products from each other as domestic goods or those from countries with most-favored nation trade status.

Ahn said South Korea will demand the U.S. revise the IRA if necessary.

"In case it (revision) takes time, we will seek various measures by the (U.S.) administration that can offset" the effects of the IRA, he said, noting he is set to meet U.S. Trade Representative Katherine Tai, as well as other government and congressional leaders during his three-day visit to Washington.

"We plan to meet and send our message to as wide range of people as possible so that our position can be reflected as much as possible at (U.S.) Congress and government in the future," he added.

Ahn's visit here follows that of a government delegation, led by Deputy Trade Minister Ahn Sang-il, last week. Industry Minister Lee Chang-yang is also scheduled to visit the U.S. later this month to meet his U.S. counterparts on ways to minimize the negative impact from the U.S. law.