(ATTN: UPDATES with the latest toll in headline, lead, 4, 9 paras)
By Park Boram

SEOUL, Sept. 6 (Yonhap) -- Three people were found dead and eight others went missing in South Korea after Typhoon Hinnamnor passed by the southern part of the country Tuesday, authorities said.

Pohang city officials said seven people were reported to be out of contact after entering the inundated underground parking lot of an apartment building in the city at around 6:30 a.m. to remove their cars.

Rescuers are currently carrying out an operation to drain the parking garage and find those missing.

A 66-year-old woman who was unaccounted for after entering the underground parking garage of another apartment building in Pohang in the morning was found dead six hours later, the officials said.

Two women were earlier reported dead in the aftermath of Typhoon Hinnamnor.

A 75-year-old woman was left dead in the southeastern coastal city of Pohang, according to the Safety Countermeasures Headquarters. She went missing after being swept away by torrential water on a road at 7:57 a.m. while evacuating with her husband and daughter, and was found dead in the area an hour later.

Another woman in her 80s was found buried in mud in a collapsed house in Gyeongju at around 11 a.m. 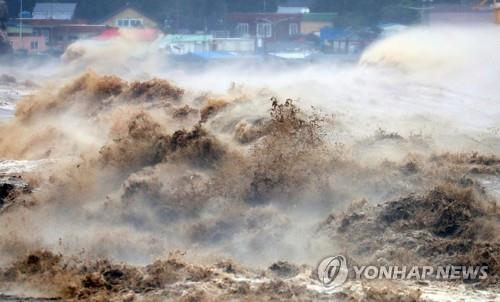 In Ulsan, a 25-year-old man went missing after falling into a stream at around 1 a.m. under the influence of alcohol, while another person remains unaccounted for after being swept away by torrential waters in Pohanag.

Another person was reportedly hit by a falling signboard and injured in Siheung, about 26 kilometers southwest of Seoul.

This year's 11th typhoon moved off the southeastern coastal city of Ulsan, 307 kilometers southeast of Seoul, toward the East Sea at 7:10 a.m. after making landfall near the southern city of Geoje at 4:50 a.m., according to the KMA. 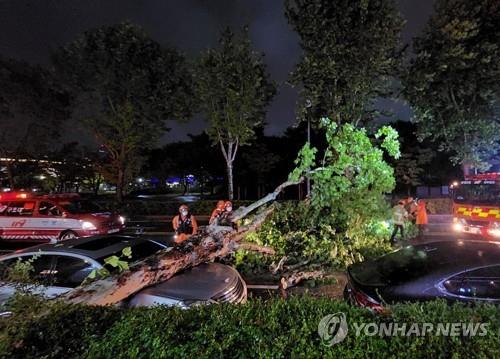 With an atmospheric pressure of 955 hectopascals at its center and maximum wind speed of 40 meters per second as of 6 a.m. the intensity of Typhoon Hinnamnor was similar to that of Maemi in 2003, one of the most devastating typhoons to hit South Korea.

Hinnamnor is forecast to move upward to reach waters 100 km northeast of Ulleung Island at noon and 560 km north-northeast of the island at 6 p.m. to further proceed northeast toward Japan's Sapporo at midnight, the KMA said.

As of 9 a.m., Hinnamnor had been heading northeast at a speed of 62 km per hour in waters 110 km south-southwest of Ulleung Island.

The typhoon is expected to weaken as an extratropical cyclone by the time it reaches near Sapporo, it said.

A total of 2,909 people from 2,143 households in landslide- and flood-prone areas nationwide were evacuated for safety concerns, while 66,341 homes suffered power outages, for which restoration work is under way. 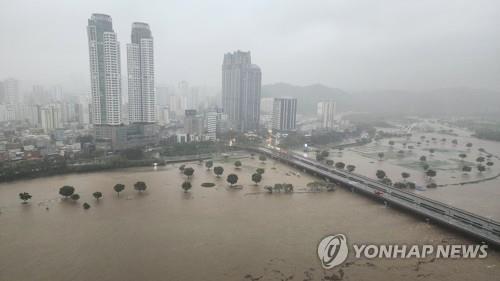 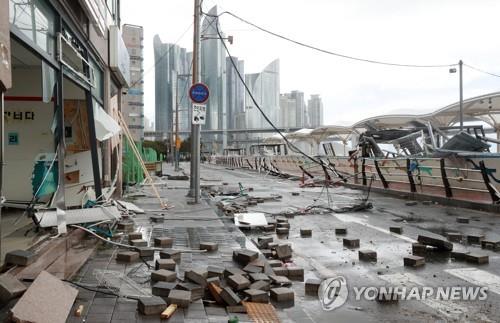 A total of eight houses and buildings in Jeju and elsewhere have been inundated, with four fishing boats reported to have been capsized in the aftermath of the typhoon.

The typhoon had also left many highways and roads across the country closed, including several sections of the Olympic highway that runs through Seoul, as of Tuesday morning.

Shortly before noon, most typhoon warnings were lifted in the country, except in regions along the east coast.

The accumulated precipitation from Sunday through early Tuesday reached 948 mm in parts of Jeju, 389 mm in a mountainous area in the city of Gyeongju and 272 mm in Seoul's Gangnam district.

President Yoon Suk-yeol appealed the nation to "stay vigilant until the typhoon completely passes through," according to one of his spokespeople.