SEOUL, Sept. 6 (Yonhap) -- Opposition leader Lee Jae-myung decided not to comply with a prosecution summons for questioning, because he has answered all questions in writing, an official said Tuesday, as the party has bristled at the subpoena and denounced it as political revenge.

Lee of the main opposition Democratic Party (DP) has been asked to come to the Seoul Central District Prosecutors' Office by 10 a.m. Tuesday for questioning over allegations that he violated the election law by making false statements about development projects pushed for when he was mayor of Seongnam, south of Seoul.

"Chairman Lee accepted the prosecution's request for written questioning and submitted a written response. Since the cause for attending the probe has dissolved, Lee will not attend in person," Rep. An Ho-young said in a written press briefing.

An said Lee submitted his response to the Seoul Central District Prosecutors' Office a day earlier and notified the prosecution by phone.

The DP has branded the investigation as "political revenge" against Lee and "political oppression" aimed at breaking up the opposition party. Lee also protested the summons, saying the Yoon government is "nitpicking with something absurd."

In an emergency meeting held a day earlier, DP lawmakers decided to recommend its leader to snub the in-person questioning and to seek an independent counsel probe into stock manipulation allegations involving first lady Kim Keon-hee.

The party also filed a complaint against President Yoon Suk-yeol with the Seoul Central District Prosecutors Office on charges of stating false information with regard to the stock manipulation allegations in violation of the election law.

Tuesday's move is seen as preventing the risk of Lee's allegations ballooning into a bigger case, with the DP suspecting the prosecution has set its plan to indict the opposition leader regardless of the results of the questioning.

Lee was elected the DP's new leader in a landslide vote in late August after losing to Yoon in a razor-thin margin in the March presidential election.

In connection with the probe, prosecutors from the Seoul Central District Prosecutors' Office on Tuesday raided the office of a former aide to Lee located at the Gyeonggi provincial government office.

The person formerly worked for Lee as a public affairs official while he was serving as Seongnam mayor. 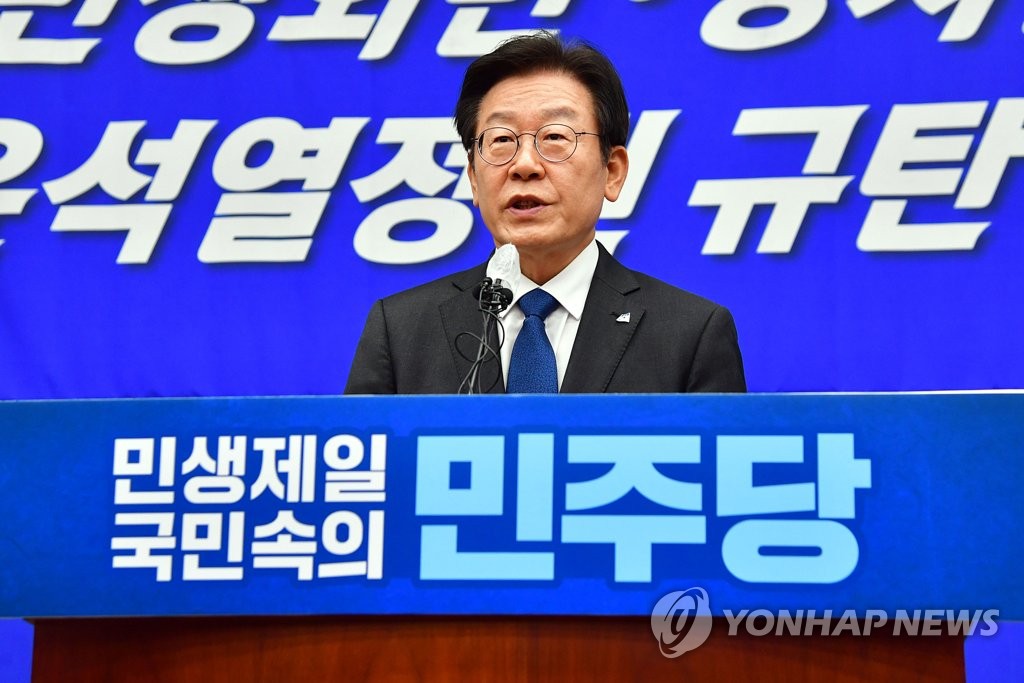