SEOUL, Sept. 7 (Yonhap) -- Major South Korean business enterprises, including Samsung, SK and Hyundai, are stepping up their campaign across the globe for Korea's bid to host the World Expo in the southern port city of Busan in 2030.

The moves come as part of South Korea's full-fledged efforts to host the world event that is expected to create huge economic effects for the host country, similar to the FIFA World Cup and the Olympic Games.

Samsung, the country's top conglomerate, has taken on a mission to reach out to some 31 countries to promote Korea's expo campaign and drum up support for the bid. 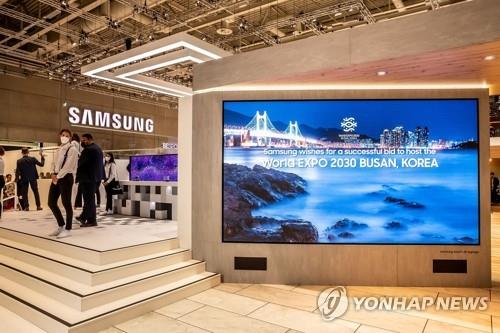 Samsung heir Lee Jae-yong has been assigned as a special presidential envoy for the Busan Expo bid and is likely to visit Britain later this month in support for the campaign.

Lee's assignment to the job came after the de facto head of the country's richest conglomerate was granted a pardon by President Yoon Suk-yeol in August over the bribery conviction that led him to serve a 2 1/2 year prison term.

This was seen as deja vu similar to his father, Lee Kun-hee, the late Samsung patriarch, who was given a presidential pardon for a tax evasion conviction before he took on a lobbying campaign that eventually earned South Korea the rights to host the 2018 Winter Olympics in PyeongChang.

SK, South Korea's second-largest conglomerate by assets, is taking brisk steps to do its part for Korea's expo campaign, having launched its own task force consisting of top SK executives to take charge of the global promotion targeting 24 countries. 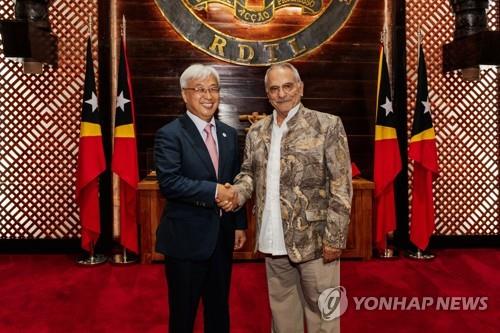 Cho Dae-sik, head of SK's Supex Council, the top decision-making body within SK Group, made his pitch for the expo bid when he attended the Pacific Islands Forum leaders' summit in Fiji in July.

Kim Joon, chief of SK Innovation Co., the refinery unit, highlighted the need for Busan to host the expo when he met with top Polish officials, including Waldemar Buda, the minister for economic development and technology, during his trip to the East European nation last month.

SK Group Chairman Chey Tae-won is expected to visit Japan later this month as a special envoy for the expo campaign. Talks are also under way to arrange a meeting between Chey and Japanese Prime Minister Fumio Kishida, according to industry and government sources.

Chey, who doubles as the chief of the Korea Chamber of Commerce and Industry, plans to visit Osaka, the host city for the 2025 World Expo. 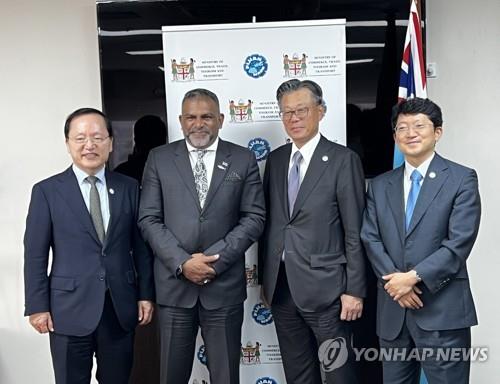 Hyundai Motor Group is undertaking a similar campaign in 21 other foreign nations. In July, the automotive company invited key officials from Costa Rica and Honduras to South Korea on a trip that included a tour of its motor studio in Busan.

In June, Hyundai sent one of its research fellows to Paris as a member of the South Korean delegation for the bidding presentation at the general assembly of the Bureau International des Expositions (BIE), the intergovernmental body that oversees the World Expo.

LG, the chemicals-to-electronics conglomerate, has joined the expo campaign by putting promotional digital signage on display at some of the world's most famous landmarks, such as Times Square in New York and Piccadilly Circus in London.

Shin Dong-bin, chief of the retail conglomerate Lotte, called for support for Korea's expo bid during a courtesy call on Vietnamese President Nguyen Xuan Phuc during his trip to the Southeast Asian country late last month. 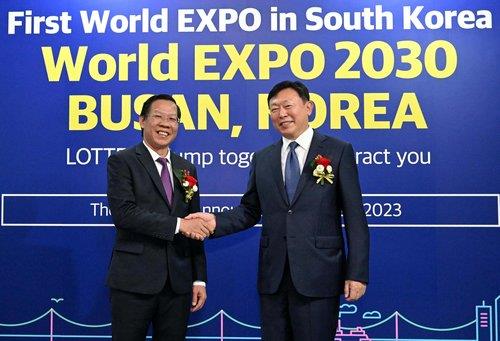 POSCO, South Korea's steel giant, is reaching out to Indonesia, Vietnam, Thailand and several Latin American countries, including Mexico and Argentina, to ask for their support for the expo bid.

In July, South Korea's bidding committee, headed by Prime Minister Han Duck-soo, announced it will begin in earnest the promotional activities for the expo. An entrepreneurs subcommittee, comprising major private companies, was launched under the bidding committee to take charge of global campaigns.

The government plans to submit its formal World Expo bid to the BIE on Wednesday.

South Korea is competing with Italy and Saudi Arabia. The BIE will announce the host in November 2023.