"It's a title that is intuitive and creates a strange tension," YG Entertainment said in a release. "BLACKPINK will once again captivate music fans around the world with its unique charisma and girl-crush charm," it added.

The agency, however, did not give details of the new song.

The quartet's second full-length album, "Born Pink," will drop on Sept. 16. "Pink Venom," a prereleased single from the upcoming album, debuted atop Billboard's Global 200 and Global 200 Excluding United States charts, and was 22nd on the latest British Official Singles Chart after it was released on Aug. 19.

The single surpassed 100 million streams on Spotify, the world's largest music streaming service, only 17 days after it was out. This is the fastest record for any female K-pop group, according to YG. 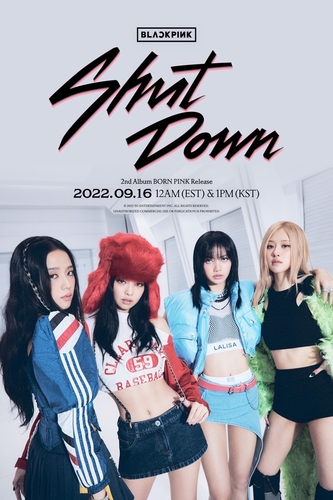 BLACKPINK's upcoming album to be led by 'Shut Down'

BLACKPINK's upcoming album to be led by 'Shut Down'