South Korean actors Lee Jung-jae, Park Hae-soo and O Yeong-su will leave Seoul on Thursday, Friday and Saturday, respectively, while actress Jung Ho-yeon will fly directly to the U.S. from a foreign country where she is now staying for work, according to the agencies.

The nine-part Netflix series has been nominated in six categories -- best drama series, best director, best screenplay, best actor for its lead Lee, best supporting actor for O and Park, and best supporting actress for Jung -- in the 74th Emmy Awards at the Microsoft Theater in downtown Los Angeles on Monday (U.S. time). 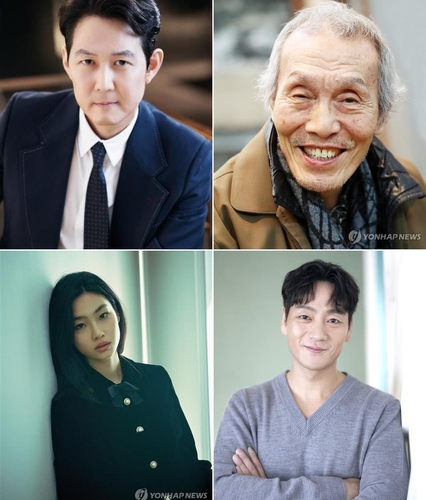 For the 77-year-old actor, who played the sick elderly contestant Oh Il-nam in the hit series, this will mark his first attendance in an overseas awards ceremony in his 58-year-long acting career. In January, he won best TV supporting actor at this year's Golden Globe Awards for his role in "Squid Game" but did not attend the ceremony held in Los Angeles.

He was nominated for best supporting actor together with Park Hae-soo in this year's Emmys.

"I feel it meaningful that we have won nominations for the prestigious global awards," he said. "I hope my junior (Park) will get an award since I won last time, but I also think it will not be bad if I win again," he said, smiling.

Released in September last year, "Squid Game," written and directed by Hwang Dong-hyuk, revolves around a group of desperate people forced to compete in a deadly competition for a chance to win a huge cash prize.

It was Netflix's biggest hit original series ever, with a total of 1.65 billion hours of viewing in the first four weeks.

Lee played Ji-yeong, a young woman who joins the mysterious contest after being released from prison for killing her abusive step-father.