(ATTN: UPDATES with reports of a press release from the office of USTR in paras 7-9)
By Byun Duk-kun

Ahn made the remarks after meeting with U.S. Trade Representative (USTR) Katherine Tai.

"We will discuss specific dates and other details (of the launch) as quickly as possible, but I plan to meet USTR Tai every week, including next week and week after that," the South Korean official told reporters. 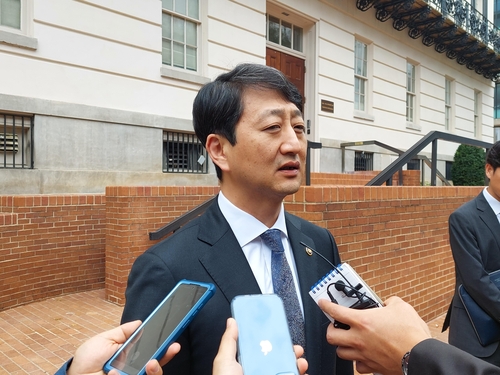 Ahn arrived here Monday for talks on the new U.S. law that provides a government tax credit of up to US$7,500 to each American buyer of electric vehicles assembled in North America, which excludes all South Korean-made electric cars from the benefit.

Seoul believes the IRA violates the Korea-U.S. free trade agreement, which requires the countries to treat products from each other the same as their domestic goods or those from countries with most-favored nation status.

"The U.S. government too fully understands the seriousness of this issue, and so we plan to continue our consultations on how it can actually be resolved with practical measures," said Ahn.

The office of the USTR confirmed its agreement to launch a consultation channel with South Korea to discuss the issue.

"Ambassador Tai listened closely to the ROK's concerns about the electric vehicle (EV) provisions of the Inflation Reduction Act of 2022 and the two committed to open an engagement channel on these issues," it said in a press release, referring to South Korea by its official name, the Republic of Korea.

"The ministers also discussed a broad range of trade issues with the goal of forging a stronger partnership in areas of common interest, including with respect to challenges related to supply chains, efforts to support environmental protection, and ways to strengthen our cooperation in regional and multilateral fora including APEC and the G-20," it added.

The South Korean official said he and his U.S. counterpart, Tai, will hold in-person meetings for two consecutive weeks at least, when asked.

Ahn earlier said Seoul will demand a revision of the new U.S. law, if necessary.

He said alternative solutions may still be possible.

"Since we have formed a consultation channel with the USTR as I had hoped and agreed to start detailed discussions on this issue, we will continue our discussions as many alternatives as possible," he told reporters.