"The Seoul government has been actively pushing to ease regulations to promote corporate investment. We will extend support particularly for investment in such strategic fields as semiconductors and that contributes to stable supply chains," Jang said.

He also asked for the French business leaders' support for South Korea's bid to host the World Expo in 2030.

Jang is in France to submit the official application to host the event in the southern city of Busan. South Korea is competing with Italy and Saudi Arabia, and the final winner will be decided around November 2023.

Earlier in the day, the vice minister met with officials of South Korean companies doing businesses in France, including Samsung Electronics Co. and biopharmaceutical firm Celltrion Inc., and listened to difficulties they are facing due to administrative hurdles in France, high energy prices and other external uncertainties, the ministry said.

Jang vowed to seek solutions in close consultations with the French government and other trade-related public institutions at home, it added. 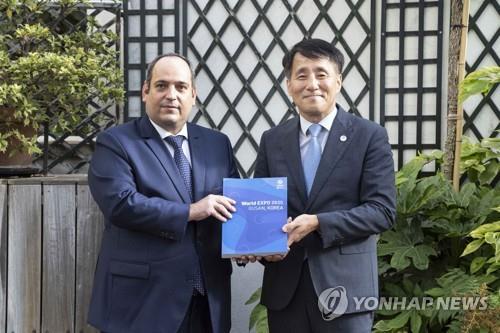