EUIJEONGBU, South Korea, Sept. 8 (Yonhap) -- Gyeonggi Province, which surrounds Seoul, said Friday it will hold a forum next week to discuss ways to promote inter-Korean peace and cooperation, and preserve the ecosystem of the Demilitarized Zone (DMZ), the heavily fortified border between the two Koreas.

The fourth annual DMZ Forum will be held at the Korea International Exhibition Center (KINTEX) in Goyang, just northwest of Seoul, on Sept. 16-17, under the theme of "Green Detente from the DMZ."

The 4-kilometer-wide DMZ has served as a buffer between the two Koreas since the end of the 1950-53 Korean War. 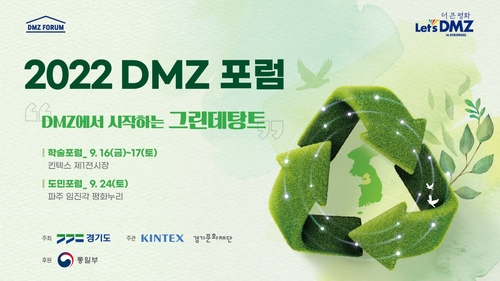 Kim Dong-yeon, governor of Gyeonggi Province, and Choe Jae-chun, distinguished professor of ecoscience at Ewha Womans University, will speak during the keynote session at the opening ceremony on Sept. 16.

Kim will unveil the province's new vision for the development and preservation of the border region and peace and cooperation with North Korea, the provincial government said.

The forum will offer 15 sessions on topics that include inter-Korean economic and environmental cooperation, sustainable development of the border region, Europe's experiences of common security and global responses to the climate crisis.

The province also plans to hold a town hall meeting with about 200 northern Gyeonggi Province residents at Imjingak Pyeonghwa Nuri Park in Paju, some 30 kilometers north of Seoul, on Sept. 24.
(END)