SEOUL, Sept. 9 (Yonhap) -- North Korean leader Kim Jong-un publicly expressed his determination not to give up the country's nuclear weapons, accusing the United States of seeking the collapse of his regime, not just denuclearization.

He made clear that Pyongyang has no intention of resuming negotiations for denuclearization, as the North's rubber-stamp parliament approved a new nuclear force policy during a key session earlier this week, according to the official Korean Central News Agency (KCNA) on Friday.

"The aim of the United States is not just to eliminate our nuclear weapons themselves but also ultimately to bring down our regime anytime by forcing (North Korea) to put down nuclear weapons and give up or weaken the power to exercise self-defense," Kim was quoted as saying in his speech at the Supreme People's Assembly (SPA) meeting the previous day.

He took issue with the U.S. bid for the denuclearization of North Korea through the "biggest-ever sanctions and blockade." He described it as a "misjudgment and miscalculation of adversaries."

Most importantly, Kim added, the North should incessantly expand the scope of its "tactical nuclear operation" in order to bolster its nuclear combat posture. 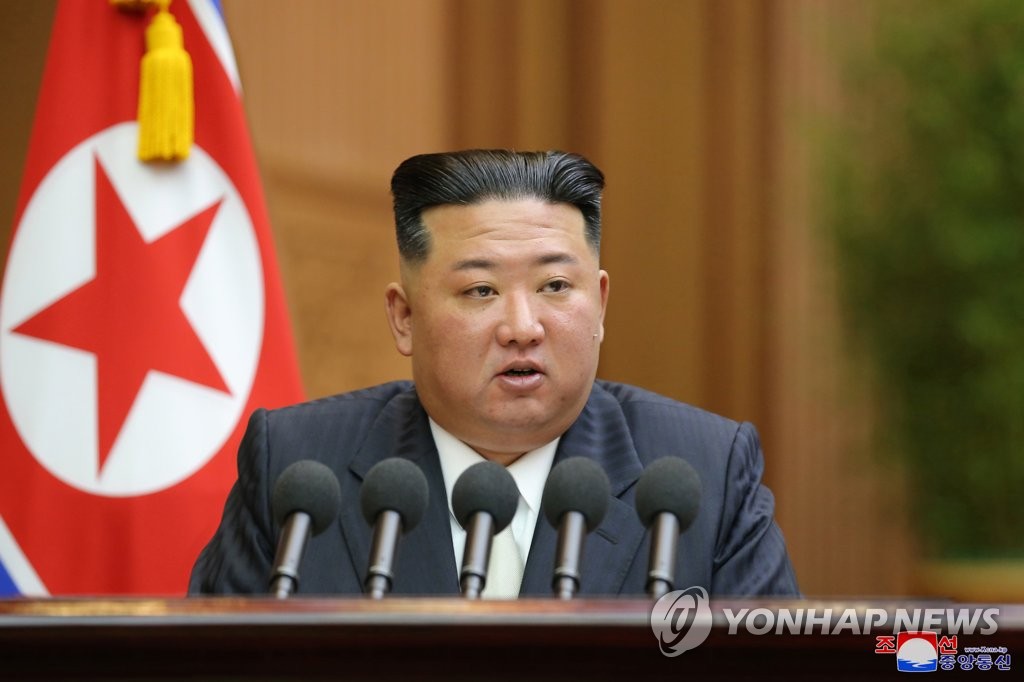 His strong message came as the SPA adopted a new law that allows the regime to launch an "automatic nuclear strike" if it is attacked.

Under the law, a nuclear strike can be automatically and immediately carried out to destroy the origin of a provocation if the command and control system of the nuclear forces is in danger of an attack by "hostile forces," the KCNA said.

Kim then stressed that legalizing the nuclear weapons policy has "great significance in drawing an irretrievable line" so that it can no longer bargain with its nuclear power.

He added that the "political and military conditions of the Korean Peninsula," as well as the global political environment, must change for there to be any adjustment of the North's nuclear policy.

Touching on domestic issues in his address, Kim called for a vaccination campaign against "the malicious virus," apparently referring to COVID-19 and advised people to start wearing masks in November as immunity levels could fall around October.

Kim's remarks added to the speculation about whether the North will respond to offers from Seoul and Washington on COVID-19 vaccine assistance.

At the meeting, Ri Son-gwon, the head of the North's ruling party's United Front Department tasked with handling inter-Korean relations, was promoted to a member of the Presidium of the SPA.

The SPA is the highest organ of power under the North's constitution, but it rubber-stamps decisions by the ruling party. It usually holds a plenary session in March or April to deal mainly with the budget and cabinet reshuffles.

Meanwhile, the North staged a large nighttime event in Pyongyang on Thursday to celebrate the 74th anniversary of the country's foundation. Kim attended it together with his wife, Ri Sol-ju, the KCNA reported.

Nuclear talks between the U.S. and the North have remained stalled amid little progress in inter-Korean reconciliation since the Hanoi summit between then U.S. President Donald Trump and Kim ended without a deal in 2019.