SEOUL, Sept. 11 (Yonhap) -- POSCO, South Korea's top steelmaker, said Sunday it has restarted one of three blast furnaces at its main steel mill, which had been shuttered over Typhoon Hinnamnor last week.

POSCO halted operations of the No. 2, 3 and 4 blast furnaces in Pohang, an industrial city located some 270 kilometers southeast of Seoul, on Wednesday, as the typhoon caused flooding of power supply stations and other related facilities.

Of the three, the No. 3 furnace resumed operation Saturday, and the remainder will be back to normal operations as early as Monday, according to the steelmaker.

POSCO said that recovery work to restore rolling and other affected facilities is now under way as the firm mobilized some 300 officials. The local government and the Marine Corps also sent their personnel and equipment to the mill to support the firm.

It marked the first time for the company to halt operations of its Pohang factory in its half-century history. 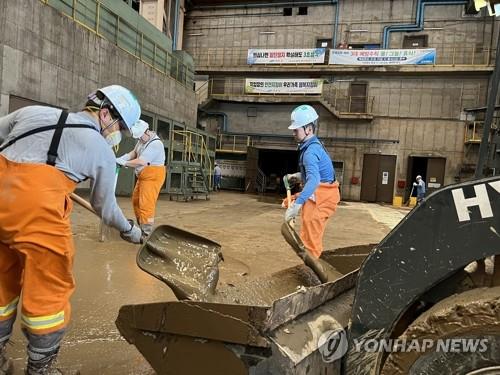