MADRID/LISBON/SEOUL, Sept. 14 (Yonhap) -- National Assembly Speaker Kim Jin-pyo met with the Spanish Senate leader and the Portuguese president to discuss ways to widen economic cooperation with Korea during his two-nation trip to the respective countries, his office said Wednesday.

During their 30-minute meeting in Madrid on Tuesday (local time), Kim and Ander Gil Garcia, president of the Senate of Spain, discussed how they could enhance cooperation in areas like renewable energy, electric vehicles, construction and infrastructure.

Kim asked for Spain's support for South Korea's bid to host the 2030 World Expo in the southeastern port city of Busan, while Gil anticipated that an envisioned plan to open direct flights connecting Seoul and Madrid and launch a Spanish cultural center in South Korea will boost exchanges between the two countries.

Kim's visit to Spain, which included a meeting with the leader of Spain's Congress of Deputies, came as part of efforts to strengthen parliamentary cooperation between the two countries after Seoul and Madrid agreed to elevate their bilateral relationship to a "strategic partnership" last year. 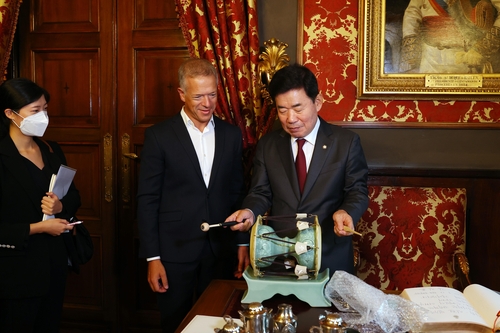