SEOUL, Sept. 14 (Yonhap) -- The industry ministry said Wednesday it will run a task force to support steelmakers with post-typhoon recovery work and to check the supply situation of steel products to minimize damage by Typhoon Hinnamnor.

Last week, the typhoon hit the southern part of South Korea and affected steelmaking facilities run by major companies, including POSCO and Hyundai Steel. POSCO had halted blast furnaces at its main steel mill in Pohang for the first time in its half-century history.

The task force will hold its first meeting later in the day with the steelmakers, their association and state-run trade entities to share the extent of damage and the current situation, and assess their impacts on exports and other related sectors, according to the Ministry of Trade, Industry and Energy.

The steel industry in Pohang suffered "a very serious, nearly unprecedented level of damage," and the full recovery of those facilities is likely to take a long time, with a hot rolling factory not to be put into normal operations for up to six months, First Industry Minister Jang Young-jin said.

Industry officials said there wouldn't be an immediate problem in the supply side thanks to sufficient stocks amid the recent slowing demand. But some items are produced only in the Pohang region and necessary steps will need to be taken in consultation with companies, he added.

The government will also set up a joint team with experts to learn the exact circumstances of related supply chains and come up with supportive measures.

"We will also look into what caused such a grave impact though the typhoon had been well forecast," Jang said.

POSCO restarted all of its three typhoon-hit blast furnaces in Pohang on Tuesday after a weeklong shutdown, but some rolling and other facilities are still shut down.

The company has said it will increase production at five blast furnaces in the southern city of Gwangyang, as none of them were affected by the typhoon.

Hyundai Steel also saw some of its facilities at the Pohang factory damaged by the flooding.

Last week, the government designated Pohang and the adjacent city of Gyeongju as a special disaster zone to provide people and businesses there with emergency relief funds and other benefits. 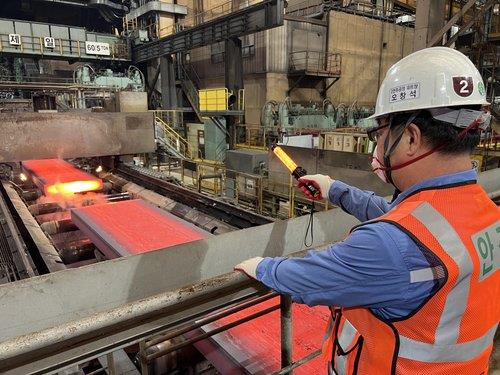