Samsung said Lee met President Laurentino Cortizo of Panama on Tuesday in the capital of Panama City to discuss ways to boost Samsung's business in the Central American nation.

He also asked Cortizo to support South Korea's bid to host the 2030 World Expo in the southern port city of Busan in his capacity as a presidential envoy for the campaign.

Lee, Samsung's de facto leader, is currently standing trial over the 2015 merger between two Samsung affiliates and alleged accounting fraud at the pharmaceutical unit Samsung Biologics. The merger and fraud are widely seen as key steps to strengthen his grip on the group.

With the ongoing business trip, he will not be attending his trial Thursday, Samsung said. The next trial is slated for next Thursday and Friday. 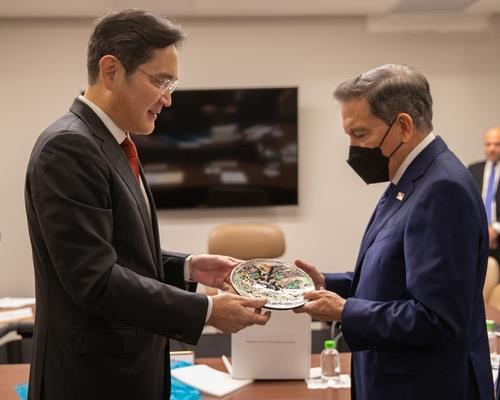 Panama is Samsung Electronics' first export destination of its color televisions back in 1977 and is where Samsung opened its first overseas office.

Prior to his visit to Panama, Lee visited Mexico to check Samsung's operations there and meet staffers, marking his first overseas trip since he was granted a presidential pardon in August over the bribery conviction that led him to serve a 2 1/2-year prison term.

As his next stop, Lee is speculated to travel to Britain or the United States in time for South Korean President Yoon Suk-yeol's visit there.

Yoon will be heading to Britain to attend the funeral of Queen Elizabeth II on Sept. 19 before giving a keynote speech at the U.N. General Assembly on Sept. 20.

During Yoon's visit, there could be promotional events for South Korea's expo campaign.

The Bureau International des Expositions, the intergovernmental body that oversees the World Expo, will announce the host in November 2023. South Korea is competing with Italy and Saudi Arabia.

Samsung's Lee not to attend trial due to business trip abroad

Samsung's Lee not to attend trial due to business trip abroad