SEOUL, Sept. 14 (Yonhap) -- The state-run Korea Development Bank is open to "flexibility in pricing" as it seeks to accelerate the privatization of Daewoo Shipbuilding & Marine Engineering Co. (DSME), the bank's chairman said Wednesday.

The KDB carried out a workout plan of the world's fourth-biggest shipbuilder by orders from 1999 to 2001. The state lender has made multiple attempts to privatize the shipbuilder over more than 20 years but failed, largely due to disagreements on price.

KDB chairman Kang Seog-hoon said the bank will prioritize the speedy sale of its DSME shares so that the shipbuilder can improve efficiency and R&D competence.

"Rather than taking more time on negotiation of the price, it seems better to make a quick sale with flexibility in pricing," Kang told reporters in a media conference at the KDB's Seoul headquarters.

"The KDB's current role as the largest shareholder of DSME has become obsolete in terms of efficiency. DSME needs more investment and R&D to grow into a more splendid company," he said.

The swift privatization of DSME is one of KDB key agenda items of Kang's term, along with timely financing for promising businesses and the smooth transfer of KDB's headquarters from Seoul to Busan.

The politician-turned banker came to his chairmanship in June.

Nothing is fixed about the timeline and manner of the sale, Kang added.

"We are not requiring specific ways of sale like split sale and all-in-one sale. Adding pre-requisites would not necessarily raise the possibility of a successful deal," he said.

If a valid buyer wants a split deal, the KDB is willing to review the conditions, he added. 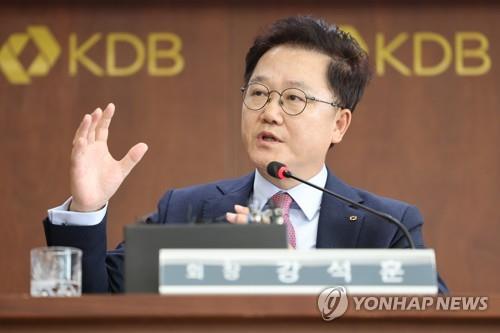