SEOUL, Sept. 15 (Yonhap) -- A woman believed to be the mother of two children whose bodies were found in suitcases in New Zealand last month was apprehended in South Korea on Thursday, police said.

The woman, known as a South Korean-born New Zealand citizen in her 40s, was arrested at an apartment in Ulsan, 307 kilometers southeast of Seoul, the National Police Agency said. 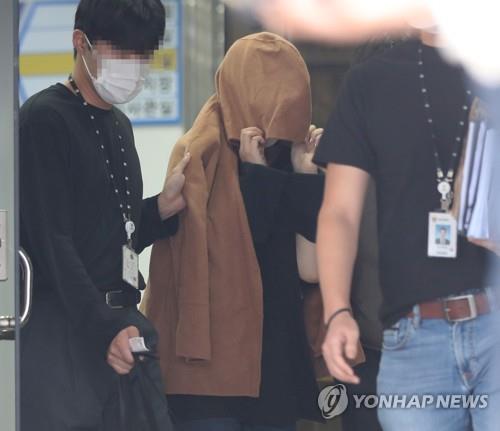 Local police had tracked down the woman at the request of New Zealand police after the remains of the two children believed to have been killed in 2018 at ages 7 and 10, respectively, were found on Aug. 11 in suitcases bought by a resident of Auckland, New Zealand, at an auction.

New Zealand police then launched a manhunt after presuming the woman as the mother of the two children and the murder suspect.

The woman born in South Korea is said to have acquired New Zealand nationality after her immigration, and her husband is reported to have died of a disease there.

The woman, while en route to Seoul, was asked by reporters whether she would confess to the crimes, but she flatly denied the murder allegations.

"I didn't do it," the woman, who was covering her head with her clothes, said repeatedly.

She reportedly fled to South Korea after her alleged crimes in New Zealand and stayed in Seoul and other places before moving into an acquaintance's apartment in Ulsan early this year.