SEOUL, Sept. 16 (Yonhap) -- President Yoon Suk-yeol said Friday he instructed the justice ministry to come up with improvements to the anti-stalking law following the shocking murder of a subway worker by a colleague inside a subway station restroom.

The 20-something victim was killed inside a ladies' restroom at Sindang Station on Line 2 on Wednesday after being stalked by the suspect for years. 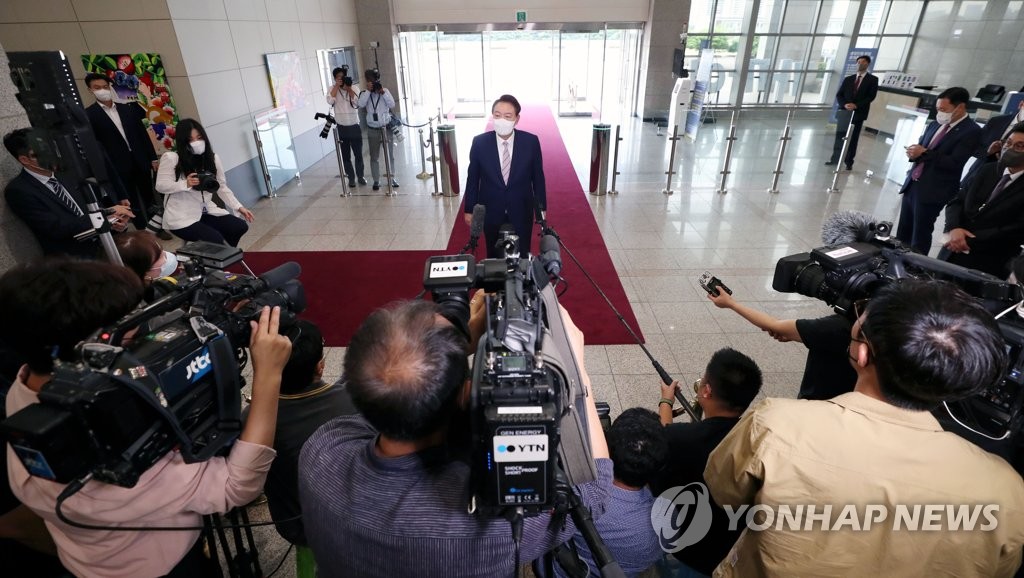 "The news is causing great shock to the people," Yoon said as he arrived for work. "The anti-stalking law was enacted last year, but many said it wasn't enough to protect victims. I told the justice ministry before leaving on my trip to remedy the system and fully ensure that victims are protected so as to leave no room for such crimes."

Yoon is set to depart Sunday on a three-nation tour of London, New York and Canada.

In New York, he will hold his first-ever summit with Japanese Prime Minister Fumio Kishida and a separate summit with U.S. President Joe Biden on the sidelines of the U.N. General Assembly next week, according to his office.

"I believe we'll have wide-ranging discussions on bilateral development and various global issues, as well as pending bilateral issues," Yoon said without elaborating.

The meeting with Kishida will be the first summit between the two countries since December 2019 and raises hope for improving relations frayed badly over wartime forced labor and other issues related to Japan's 1910-45 colonial rule.