SEOUL, Sept. 16 (Yonhap) -- The South Korean economy is feared to lose steam as the country is grappling with high inflation and the slowdown in export growth amid growing external uncertainties, the finance ministry said Friday.

The gloomy outlook came as the world continued to face downside risks due to fast interest rate hikes by the United States and other major nations, China's strict antivirus steps, and instability in the energy market amid the prolonged war between Russia and Ukraine, the ministry said in its economic assessment report, called the Green Book.

The ministry mentioned the possibility of an economic slowdown for the fourth month in a row in the monthly report.

"Domestic demand has been on a moderate recovery track on the back of improvements in the job market and the in-person service sector. But high inflation has continued, due mainly to external factors, to affect economic sentiment, and export growth has weakened, which sparked concerns over an economic slowdown," the report said.

In August, consumer prices, a key gauge of inflation, jumped 5.7 percent from a year earlier over high energy and commodity prices.

Exports, the key growth driver, rose 6.6 percent on-year last month to come to US$56.67 billion. August also marked the 22nd consecutive month that the country's exports have logged an on-year expansion, but they began to mark single-digit growth in June following a double-digit increase for more than a year.

Adding to woes is that the country's trade deficit has been extended on high energy prices. Exports of semiconductors fell for the first time in 26 months.

"The government will beef up efforts to reinvigorate the private sector and to better manage risks, while seeking measures to stabilize people's daily lives which have been affected by the recent typhoon and high prices," the ministry said in a report. 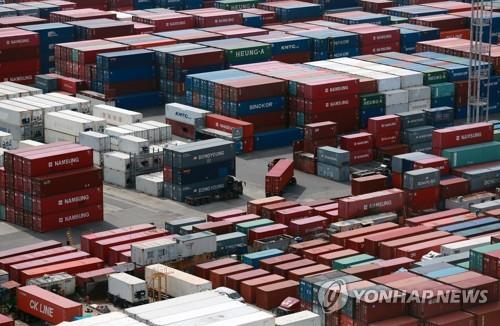