SEOUL, Sept. 16 (Yonhap) -- Globally famed K-pop boy group NCT 127 has kick-started the pursuit of its high goal of becoming a Billboard No. 1 group, back with what it proudly called the best album yet of its discography Friday.

NCT 127 was confident about the new album during a press conference held at a Seoul hotel a few hours before the release.

"It's not easy to make a studio album. 'Let's make a masterpiece album' was what we had in mind when beginning preparations for it," member Doyoung said. "We cared about the gathering of songs, recorded them with affection and felt satisfied with their quality as we monitored them one apiece. So, we think a masterpiece album has come out." 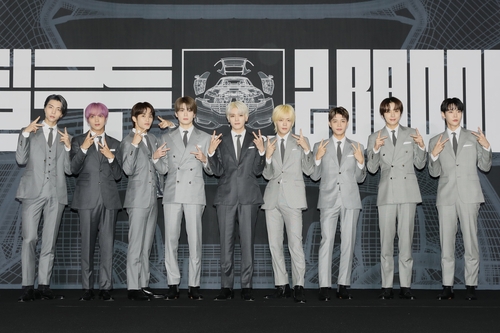 The album has a total of 12 tracks of diverse genres, including the title track, "Faster," "Time Lapse," "Crash Landing," "Designer," "Gold Dust," "Black Clouds" and "Playback."

"2 Baddies" is an intense hip-hop dance song combining the addictive signature synth and powerful vocals. Its lyrics carry a message that only those who run with eyes on precious things without caring about the eyes of people around them can grow and achieve success. It's a youth anthem fully charged with the band's confident attitude toward challenges. 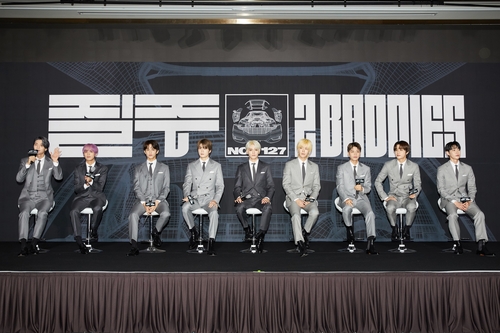 Taeyong said: "It's a song that is NCT 127 itself. It's a good title song that combines well the members' mischievous and 'neo' images, which also can be shown well in stage performances."

When asked later in the press conference what the "neo" image means, he explained the group has always pursued experimental music and dances, as well as a unique style of clothing and makeup.

"I think that style no longer feels 'strange' and 'unique' but makes us stand out from others now," he said.

Taeil stressed the bandmates put their heart and soul into the new album since it was their first release after a long time.

NCT 127 debuted in 2016 as a subunit of the umbrella boy band NCT. While based in Seoul, it has also gained a large following overseas, especially in the United States.

The new release is drawing attention from the music scene, as the band's previous studio album, "Sticker," and its repackaged version, "Favorite," have surpassed 3 million copies in combined sales and performed well on various music charts in and out of the country.

Questioned if they felt any burden from the huge success of the previous album, Doyoung said he thought it more important to make an album worth waiting for than ranking high on charts.

Johnny said the band's next goal, if any, is to climb to the top of Billboard's main charts. "It would be great if we can exert more efforts and attain a good result," he added.

NCT 127 aims high for Billboard No. 1 with new album

NCT 127 aims high for Billboard No. 1 with new album