SEOUL, Sept. 17 (Yonhap) -- South Korea and the United States warned North Korea would face an "overwhelming and decisive" response in the event of a nuclear attack, as the allies had a high-level deterrence dialogue in Washington D.C. on Friday (local time).

The two sides agreed on a "strong and resolute whole-of-government" response in case Pyongyang presses ahead with another nuclear test and "all available levers" to address its evolving military threats, according to a joint statement on the results of the Extended Deterrence Strategy and Consultation Group (EDSCG) meeting held after a nearly five-year hiatus. The session came amid a view that the North has already completed preparations for what would be its seventh nuclear test.

The EDSCG, a gathering of the allies' vice-ministerial diplomatic and defense officials, resumed just a week after the North codified a nuclear policy that leaves open the possibility of a preemptive strike in case of a regime security threat.

"The United States and the ROK made clear that any DPRK nuclear attack would be met with an overwhelming and decisive response," the statement reads, using the acronyms for the official names of South and North Korea, the Republic of Korea and the Democratic People's Republic of Korea.

The U.S. reiterated its "ironclad and unwavering" commitment to draw on the full range of its military capabilities, including "nuclear, conventional, missile defense, and other advanced non-nuclear capabilities," to provide extended deterrence for the South. 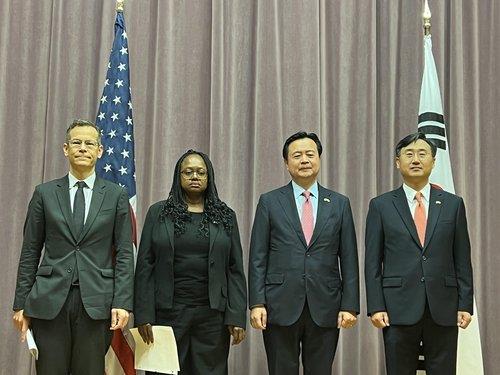 Extended deterrence refers to America's stated commitment to mobilizing the whole of U.S. military capabilities to defend its ally. Topping the EDSCG talks was the joint endeavor to enhance its credibility.

"The September 16 dialogue highlighted the commitment by both partners to use all available levers, including diplomatic, informational, military, and economic tools, to strengthen and reinforce the U.S. security commitment to the ROK, strengthen deterrence against DPRK aggression and more broadly counter the DPRK threat," the statement said.

Pointing out the North's assertive nuclear policy enshrined in a recently enacted law, the allies voiced "serious" concern and decried it as "escalatory and destabilizing messaging."

"The two sides committed to continue efforts to employ all elements of both countries' national power to strengthen the alliance deterrence posture," the statement said.

Touching on concerns about the possibility of the regime staging a nuclear test, Seoul and Washington highlighted their readiness against it.

"The United States and the ROK reaffirmed that a DPRK nuclear test would be met with a strong and resolute whole-of-government response," it said. "The two countries are closely coordinating in detail and stand ready for all possible scenarios."

As part of efforts to strengthen deterrence, the U.S. reiterated its commitment to reinforce coordination with the South to continue to deploy and exercise its strategic assets in the region in a "timely and effective" manner, according to the statement.

The reactivation of the EDSCG followed a Seoul summit deal in May between South Korean President Yoon Suk-yeol and his U.S. counterpart, Joe Biden.