SEOUL, Sept. 18 (Yonhap) -- South Korean prosecutors said Sunday that Do Kwon, the wanted founder of Terraform Labs accused of fraud following the massive collapse of the firm's cryptocurrencies in May, is "obviously on the run" and not cooperating with the investigation.

The remarks came in response to Kwon's claim in a tweet that "I am not 'on the run' or anything similar -- for any government agency that has shown interest to communicate, we are in full cooperation and we don't have anything to hide."

On Saturday, Singapore police's statement said the Terraform founder and CEO is no longer in Singapore.

The blockchain firm has been under investigation for alleged fraud and tax evasion after investors in its cryptocurrencies -- TerraUSD and Luna -- filed complaints against Kwon in May, accusing him of a Ponzi scheme over the loss of billions of won following the crash of both coins earlier that month.

The Seoul Southern District Prosecutors Office has recently had arrest warrants issued for Kwon and five others, including Terraform founding member Nicholas Platias, in efforts to repatriate them from Singapore where prosecutors had believed they were.

On Sunday, prosecutors said Kwon flew to Singapore "obviously on the run" around late April and dissolved the firm's Korean branch, Terraform Labs Korea, at that time to "evade investigation."

In May, Kwon's family members reportedly flew to Singapore, followed by key financial officials of Terraform around the time.

"Currently, we are in the process to locate the whereabouts of suspect Do Kwon and apprehend him," a prosecution official said, adding the prosecution will cooperate with local and overseas investigative bodies to get to the bottom of the case. 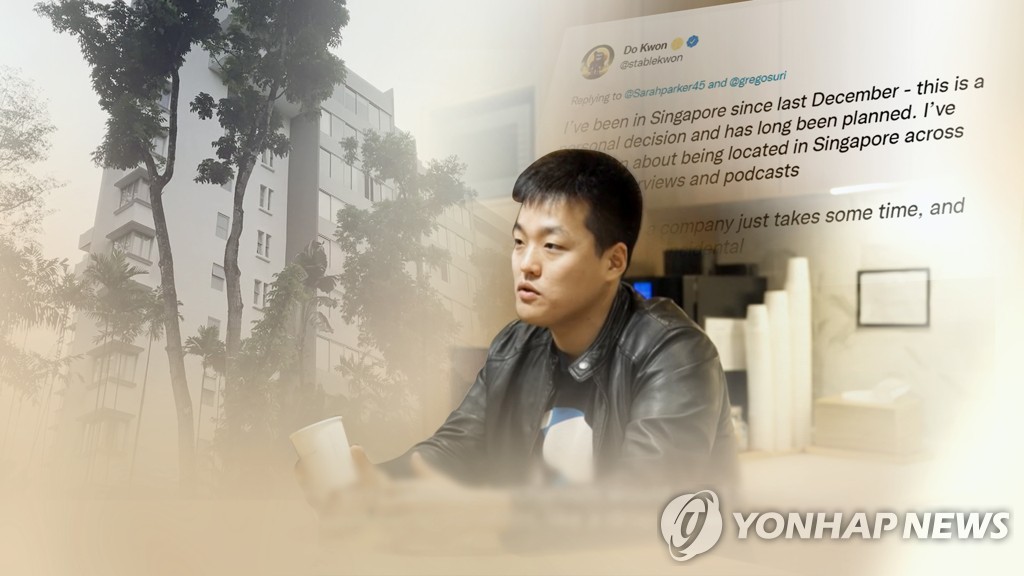 Prosecutors say Terraform founder Do Kwon 'obviously on the run'

Prosecutors say Terraform founder Do Kwon 'obviously on the run'